This by far the best 3.33 minutes of the Aronofsky Noah film. Beautiful, stunning, unspeakably profound…incredible!

I have already posted my view on the film as a whole that I saw on the day it was released, see https://jamestabor.com/bashers-of-the-noah-film-need-to-re-read-their-bibles/

As most of you know I have focused a lot on translating the book of Genesis, even though I work in New Testament and Christian Origins. I spent over a decade (1994-2005) trying to develop and improve my method of translation for the Transparent English Bible. I published the results of that last summer, see The Book of Genesis: A New Translation with nearly 1000 notes. It is available in hardcover, paperback, and Kindle e-book formats. I also did an eight episode series of podcast interviews with Jono Vandor and Ross Nichols, working verse by verse through Genesis 1-3. You can listen to them here.

Anyway, I want to write a lot more about Genesis–especially chapters 1-3. So much of Christian–and to some extent–later Jewish theology, is based on what I consider to be fundamental dualistic readings of these chapters–forcing them into later cosmological perspectives–whereas their original historical contexts really provide some amazing perspectives for our own modern times. If you get Genesis 1-3 wrong–“Creation” so-called, and the Lost World of Adam and Eve as John Walton so perceptively calls it, you get just about everything else wrong. More to come…but listen to these 3:33 minutes from Aronofsky….turn off the lights, sit in the dark, put on the biggest screen you can, and absorb. It is incredible. 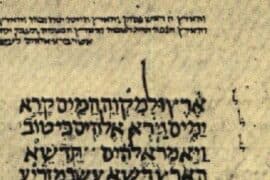 Waiting for the Messiahs–One, Two, or Three?
Hugh Schonfield and the Passover Plot–A Retrospective