This post originally appeared on the Huffington Post and drew a massive response, pro and con.  It is reposted her without editing due to popular demand as well as the important biblical and cinematic issues it addresses. Enjoy!

Darren Aronofsky’s new $100m blockbuster film “Noah” opened in 2014 in 3936 theaters to a huge wave of media attention. Google News lists over 1400 stories on the film this morning and IMDB lists 2217 articles–many of them evaluating its merits or assessing the public reaction. Mainstream reviews are mostly solidly positive (Rotten Tomatoes 73, Metacritic 68) but the film is being blasted, damned, and condemned in many conservative Christian circles. So far it has been banned in Indonesia, the largest Muslim country, as well as Qatar, Bahrain, and the UAE–but here in the U.S. those objecting most strongly to the film are Christians who find its portrayal of the Noah story “unfaithful” to the Bible. 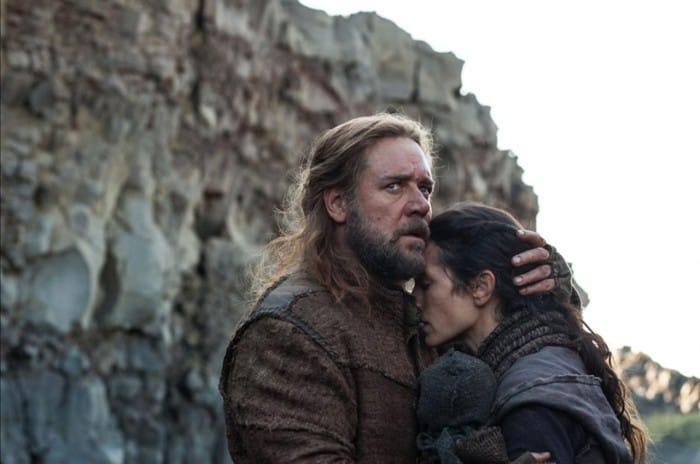 Ken Ham, the self-styled “Creationist” of recent fame for his disastrous debate with Bill Nye on “Evolution,” tells TIME magazine that the film is an insult to Christians, with “barely a hint of biblical fidelity,” and thus “unbiblical” and “pagan.” Glenn Beck, labels the film a “100 million dollar disaster,” objecting, among other things, that it is “pro-animal” and “anti-human.” Erick Erikson, on his “Redstate” blog, concludes his scorching review with the suggestion that “we might should consider burning at the stake any Christian leader who endorses this movie.” His Tweet was picked up by MSNBC and other TV media last night and has now gone viral. Brian Godawa calls the film “Godawful” in the Christian Post, referring to “the sick twisted agenda that seeps through every frame of this movie.”

None of these Christian critics explain why this ancient story, written by Jews, and part of the Hebrew Bible, should fall under Christian purview or guardianship in terms of its interpretation. But that aside, these two Jewish guys, Aronofsky and his former Harvard roommate and writing partner, Ari Handel, in aiming for what they call the “least biblical” of Bible themed films, have ended up in my view producing a film that profoundly reflects biblical themes that have been lost in most common readings of the Noah story in Genesis 6-9. I find myself in agreement with Christopher Orr’s most perceptive review in The Atlantic,

But despite its flamboyant, and at times goofy, fantasy trappings, Noah is firmly anchored by the fierce moral intensity of Aronofsky’s vision, which is, if anything, more Old Testament than the Old Testament itself.

What I want to do here is to touch on just a few of the most common Christian objections that I reference above.

The Film Never Mentions God
I have heard this objection repeatedly this weekend, particularly on FOX news and Talk Radio outlets, and it is blatantly false and ridiculous. The very word translated “God” in Genesis is not a name but a generic reference that might be translated as “The Powers” (Elohim). One can only imagine the uproar had Aronofsky chosen to call the Creator “The Powers”–which would have been quite biblical. In the Noah film this nameless One is constantly referred to as “the Creator,” but used in a very personal way by all the characters in the film–good and bad. According to Exodus 6:3 God did not make Himself known by His personal name Yahweh (YHVH) or “the LORD” until the time of Moses. The references to God as “the LORD” in Genesis 6-9 in the Flood story are accordingly anachronistic—so it turns out, ironically, that Aronofsky’s designation of God as “the Creator,” is more biblical than his critics have imagined.

The Film is Pro-Animal and Promotes Vegetarianism and Environmentalism
Here I would have to say “guilty as charged”–and thus thoroughly biblical.  What few realize is that according to the Bible humans before the Flood were never given permission to hunt, shed blood, or eat the flesh of living creatures. In Genesis 1:29 God says “I give you every seed-bearing plant that is upon all the earth, and every tree that has seed bearing fruit; they shall be yours for good.” It is only after the flood, that permission to “shed blood” and eat meat is given to humans, though it is stipulated that God will hold humans accountable even for the blood of an animal. According to the Rabbis, this means that the life of an animal must be taken without cruelty and with reverence (Genesis 9:3).

Aronofsky portrays the righteous descendants of Seth–through Methuselah, Lamech, and Noah, preserving this “peaceable kingdom” of non-violence and harmony with nature, whereas the murderous descendants of Cain had filled the earth with violence  and “corrupted its ways upon the earth.” God’s decision is to destroy humankind “along with the earth” they have corrupted (Genesis 6:12-13). The barren wasteland, and specifically the abandoned strip-mining scene, is a testimony to what humans have made of the “good Earth” that was the original Creator’s handiwork.

Noah’s family represents the last remnant of hope for humankind’s peaceable ideal in which violence toward humans or beasts is quelled and warfare ceases. This is the vision of Isaiah the prophet for the ideal human future–swords beaten into plowshares and the wolf lying with the lamb with none hurting or destroying. In fact Isaiah pictures a time when “slaying an ox” will be considered as weighty a matter as killing a human being (Isaiah 65:25-66:3).

The Film Devalues Humans
Again, I have to say, “guilty as charged”—and thus thoroughly biblical. There could be no stronger expression of the “devaluing” of humans than we find in the Bible in the time of Noah. The Creator says that He regrets that he has created the human species and that it grieves Him to his heart. The entire species is characterized as hopelessly “wicked” with every thought of the heart only evil continually (Genesis 6:5-7). It is an open question then–as Aronofsky so profoundly portrays in the film–as to whether humankind should continue. This is not a Christian text, with presuppositions about God so loving the world and sending his Son to die for sinners–with infinite love for every wicked person and their eternal salvation. That simply is not the biblical story here in Genesis 6. The issue is whether the Creation itself has been so marred and destroyed by human behavior that it is best wiped away as a failed attempt by God to create creatures in His image–who nonetheless have free will and the “knowledge of good and evil.” The Flood story touches upon the essential existential issue of our own time—our “human all-too-human” role on a planet upon which our dominant place as moral beings with choice is continually being weighed in the balance.

Noah and his family are to be spared–since they have not gone the “way of Cain,” but Noah himself, in the film, wrestles with the central dilemma of the text–should the human race be spared at all? The key point in the film, which I will not explicitly give away, is when Noah sees an evil “Serpent” reflection of himself on one of the Tubal-Cain character’s faces—a kind of flashback to the Garden of Eden–and it suddenly dawns on him that we are all of one species. This means that all of us have the potential for horrible evil manifesting itself in our lives, or in the lives of our descendants. His wife, played by Jennifer Connelly, presents the other side of the conundrum–arguing that “we are good, our children are good,” and thus should be spared to inhabit a new world in which peace and righteousness would prevail and create a new world order.

It is not a matter of Noah favoring a flower over the life of the two newborn infants (again I will not elaborate this plot line here)–but wrestling with the moral dilemma–which is the Creator’s Dilemma–of whether or not the race should continue. Not picking even a flower is the very point. This “environmentalism” represents the “good way” of caring for the earth, for its creatures, and for one another and living in peace—in sharp contrast to the way of power and exploitation of the descendants of Cain.

Tubal-Cain, played by Ray Winstone, represents an ultimately opposite perspective. For him what makes a man truly a man is the complete independence from any Creator or any other moral code–forging his individual way in the earth through his power and his choices.  As he says to Noah just before he dies—“I told you the Creator’s miracles mean nothing to me.” Thus when Ham ends up killing him to save his father he tells him–“Now you have become a man,” just because Ham has finally acted autonomously and thus gone “beyond good and evil.”

The Hebrew Bible, unlike the Christian New Testament, explores this theme of the ultimate fate of humankind and the “good earth” in any number of places. In fact, in the closing book of the Prophets, the book of Malach, which ends the Christian Old Testament, we find the sober warning that if humans do not find peace among themselves the Creator will come and “strike the earth with a curse.” The word translated “curse” (Hebrew cherem) here means an “ban of utter destruction.” So even at the end of the Hebrew Prophets humankind is pictured as standing on the brink of judgment with a choice of death or life before them.

The Film Does Not Follow the Bible
In addition to addressing these various controversial points I should add that the film has lots more–with special effects, bizarre phenomenon, and all sorts of creative and artistic embellishments on the rather “bare” story of Genesis 6-9. One must remember, however, that Genesis is not our only account of the Flood. There are other literary sources such as the Gilgamesh Epic and the mysterious books of 1 Enoch and Jubilees–revered by both ancient Jews and early Christians–but not included in the Bible–but found among the Dead Sea Scrolls. There one does read more of the mysterious heavenly “Watchers,” fallen down to earth, who teach humankind all the skills that the descendants of Cain pervert into selfish ends. There is a wonderful and emerging web site that deals broadly with this whole topic, many of the other texts, and a wide range of insightful commentary and discussion–FloodofNoah.com. I highly recommend this site to my readers. And I hope you will all see the Noah film and decide for yourselves about its value and its merits.

Jesus: The Final Cut
Egyptian Circumcision Before the Time of Abraham 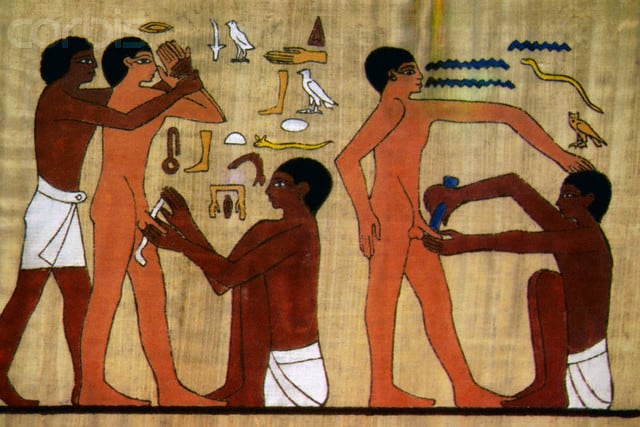