This is an informal post sent to me by e-mail from Wendy Pond one of my readers. I asked her for her permission to pass it on. This matter of sorting out the Marys in the three anointing scenes in our gospels (Mark/Matt; Luke, and John) is a complex one. I have shied away from identifying Mary “called Magdalene” with “Mary of Bethany” in John, and also leaned toward the idea of two pair of sisters named “Mary and Martha,” one in the Galilee and another in Jerusalem/Bethany (Luke 10 & John 11 being a different family) but I remain open and consider this matter unresolved. 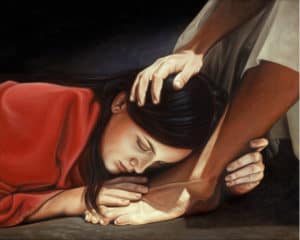 Here is Wendy’s take on things:

Luke seems purposefully to juxtapose the introduction of Mary Magdalene (as exorcised of 7 demons in 8:1-3) with the woman of the city identified as a sinner in 7:37-38 who washed Jesus’ feet with her tears, wipes them with her hair and anoints his feet – perhaps to cause intentional blurring/association of MM with the sinful woman of the city, i.e., to obscure/demote/sully any close relationship MM might have had with Jesus and thus her important status as part of Jesus’ inner circle of disciples.

Further to this, the act of washing and anointing the feet so intimately as done in Luke would be expected to be performed only by a man’s wife or servant/slave. It would have been considered sinful for any non-attached woman to do this to a man (especially in front of witnesses!). If the author of Luke was intentionally distancing MM from Jesus, he would have known this (whether he was Jewish or Gentile, I think!), so if, from Luke’s original knowledge or source, MM actually had performed this act and was close to Jesus such as wife/companion, but Luke did not wish to present her as such, Luke would have had to paint her as a sinner – even if he didn’t name her – therefore he made the association by juxtaposing 7:37-50 with 8:1-3. (“Woman from the city” could also be a true remnant from an early source descriptive of MM – from Magdala or another large, possibly Hellenized/pagan – “sinful” – city.)

I will add that within that Jewish-Mediterranean culture, when women were traveling with men, it would have been assumed they were either wives, sisters, daughters or servants/slaves, i.e., attached to the men as family/household/property, and a man meeting a mixed group of travelers on the road would likely never even bother to ask another man about the relationships of women traveling with him. The fact that Jesus’ group had independent women traveling with them was probably highly unusual, and why Luke mentions it 8:3 – maybe he couldn’t avoid/omit it. Once again, Luke associates MM with these important, independent women (wealthy? and/or had left their families/husbands?) who provided for Jesus/the group from their means. But was MM truly independent – as in, unattached, no relation to Jesus at all other than spiritually/part of the movement? Luke has sandwiched MM between these two vignettes, and has painted her as a woman who was (at least formerly) ill/mentally unstable, on top of it all.

While Mark does not identify the woman, John identifies her as Mary, sister of Lazarus and Martha, and both annointing accounts take place in Bethany. In both accounts, “some” present (disciples? other guests?) or Judas Iscariot complain/s about the waste of the costly spikenard, but no-one complains about how sinful or shocking it would have been for a woman not related to Jesus to perform such an intimate act (any form of touching!), especially the case in John where, again, the act involves Mary wiping Jesus’ feet with her hair! Clearly the authors of both gospels wished to emphasize the act of anointing the Messiah, but I believe any close relation the woman/Mary had to Jesus was quietly omitted from the story – the fact that there is no shocked reaction from the men in attendance to this intimate act is the loud, red flag, and it seems to indicate that those in attendance either knew or just assumed the woman/Mary (especially Mary in John) was closely related to Jesus. (That, or Jesus’ disciples and friends just accepted the fact that Jesus had an unusually open, egalitarian and casual attitude/approach toward all women – which I do believe at any rate.) I think I pointed this out in an earlier email to you, but in contrast, in the account of the Samaritan woman at Jacob’s well (John 4:27), the disciples are rather surprised to find Jesus talking to a strange woman; a man would never bother – a woman was unimportant or it wasn’t even proper. But in the annointing account with Mary, no surprise at all – why? Because Jesus’ and Mary’s relationship may have been omitted.

I believe Mary of Bethany in John is the same as the woman in Bethany in Mark 14:3-9 (clearly in that she wipes his feet with her hair – a memorable scene in deed!), and same as the woman in Luke 7:37-50, and she is Mary Magdalene. And she would have to have been Jesus’ wife or close/intimate companion. Luke unwittingly connects the dots with Mark and John, ID’ing her as MM, even though he tries to paint her in the worst light. Matthew doesn’t even mention her until the crucifixion! It’s why MM is at the tomb (with Jesus’ mother – the 2 most important women in his life, in that order!) to anoint Jesus’ body – she was his wife/companion, the first person to whom he appeared, and why none of the gospel authors could omit her completely from the story. Thus we have:

Because A and C are the same (it’s doubtful 2 anointings took place in Bethany), and because B and C are also likely the very same, highly memorable story (intimate/sensual wiping of Jesus’ feet with the hair – again, it’s not likely to have happened twice with different women!), then A and B must also be the same woman. Luke connects the dots to Mary Magdalene. Luke also put the anointing story much earlier in Jesus’ mission and turns it into a moving story about forgiveness of sins rather than the anointing of the Messiah before his death – a way of downplaying Messianism vs. Son of God or the Jewishness of Jesus? What’s also amazingly odd is that Mark omits the woman’s name even tho’ he cannot erase/omit Jesus’ words about her – his proclamation that “what she has done will be told in memory of her.” A woman to be remembered the world over with no name…. 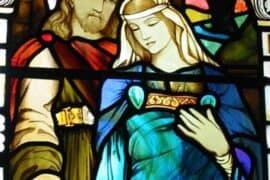