“There were three who always walked with the Lord: Mary, his mother, and her sister, and Magdalene, the one who was called his companion. His sister and his mother and his companion were each a Mary.” Gospel of Philip 36

According to the Coptic Gospel of Philip, found in Egypt in 1945 as part of the Nag Hammadi collection, Jesus was closely associated with three women named “Mary,” namely, his mother, his sister, and his “companion,” Mary Magdalene. However the passage that lists these three Marys is confusing, in that Jesus’ sister Mary is first called his mother’s sister–obviously an impossibility. Marvin Meyer and other translators have actually amended the Coptic text at this point. Such a correction is possible but one of the rules of textual critical work is that one prefer or at least consider carefully the more “difficult” reading, with the possibility left open that it might convey a meaning one might otherwise miss. 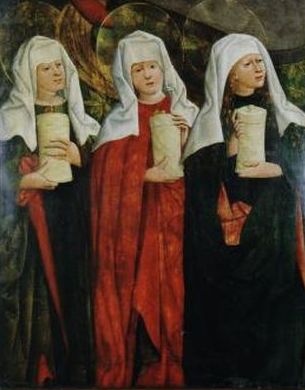 I received this most thoughtful treatment of the passage from Jennifer Duba-Scanlan, who had read my book, The Jesus Dynasty, and I pass it on with her permission. I might note here that the Gospel of Philip, is the text that also contains the passage about Jesus loving Mary Magdalene more than the other disciples and kissing her often (Gospel of Philip 59). For those who do not own copies of the Gospel of Philip I recommend the ever helpful web site Early Christian Writings, that contains several good translations and other supplementary materials.

Anyway, here is Jennifer’s take on the passage which I find instructive and well worth considering:

“There were three who always walked with the Lord: Mary, his mother, and her sister, and Magdalene, the one who was called his companion. His sister and his mother and his companion were each a Mary.” Gospel of Philip 36

I was always confused about it, because it first states that the three who always traveled with Jesus were “his mother and her sister” and Mary Magdalene. But the next sentence claims that Jesus’ “sister” (not his mother’s sister, his aunt) along with his mother and companion “were each a Mary.”

As well, if Jesus’ sister Mary traveled with him, why isn’t she mentioned in the first sentence as regards those women who “always walked with the Lord”? Or did both of his sisters travel with him as well, Mary and Salome, but just aren’t mentioned? After all, in the NT it doesn’t even give Jesus’ sisters names. Just a mention of “sisters” on a couple occasions.

This passage in Gospel of Philip, due to it’s puzzling aspect, should tell us something. As you’d be apt to say, James, “something is definitely going on here.”

And now, due to your book The Jesus Dynasty, this passage makes sense to me after reading “The Mystery of the ‘Other Mary’ ” (pg.77-80)

It’s as though, in the Gospel of Philip, they left a ‘clue’, or rather a ‘riddle’ to try to figure out -maybe they (whomever wrote it), also knew that Mary, the wife of Clophas, was not the sister or cousin or sister-in-law of Jesus’ mother Mary, as many others thought, (and still think today), but that both Marys were actually Jesus’ mother, as they are one and the same person, which you wrote about in your very insightful book.

Why else would the Gospel of Philip write it in this puzzling way as regards the trio of Marys and Jesus’ maternal aunt?

It adds, in a sense, more weight to your argument, (which I find highly likely), that the two Marys were really one and the same – Jesus’ mother Mary married Clophas, the brother of Joseph, after Joseph died, ‘possibly’ leaving Mary with no children other than Jesus, whom he wasn’t the biological father of, and thus, the father of Jesus’ half-brothers and sisters would thus be Clophas.

As well, you’d wisely noted in The Jesus Dynasty (pg 79):
“Is it really likely that these two women, both named Mary, whether sisters or sisters-in-law, married to brothers and had three sons with the same names and born in the same order: James, Joses, and Simon?”

No, not likely at all. After all, how many sisters or brothers do you know of who have the same name? Whether today or way back in the days of Jesus and family. A father/son or a mother/daughter with the same name, is one thing, and quite acceptable, but two sisters/daughters or brothers/sons with the same name, no that’s a horse of a different colour, and isn’t something you ever hear of, really. (with the exception of Michael Jackson’s sons!)

The passage quoted here from Gospel of Philip at first leaves one with the impression that there were three Marys who constantly traveled with Jesus – yet his aunt isn’t mentioned in the second group of women named Mary in Jesus’ life, so she wasn’t a Mary, least not going by what is stated here, or she’d have been listed as such – shouldn’t it have thus said: “His sister and his mother and his aunt and his companion were each a Mary.”

Also, while it lists the three Marys in Jesus’ life whom he was close to – his mother, sister and companion – it doesn’t state that all three of them traveled with him. While we know his mother Mary and Mary Magdalene did, his sister Mary may or may not have traveled constantly with him.

John 19:25:
“Now there stood by the cross of Jesus his mother, and his mother’s sister, Mary [the wife] of Clopas, and Mary Magdalene.”

I think it’s ‘possible’ that Salome is the wife of Zebedee, mother of James and John, and though it’s not mentioned directly, is the sister of Jesus’ mother Mary. Salome was at the cross and went to the tomb to anoint the body, with Jesus’ mother Mary, and Mary Magdalene, so she was close to Jesus and family, likely a family member of some kind.

In the above quote from John you could add Salome:

“Now there stood by the cross of Jesus His mother, and His mother’s sister Salome, Mary [the wife] of Clopas, and Mary Magdalene.”

Or, add Salome (as Mary’s sister) to your “decrypted version of John” in your book (pg 80):

“Standing by the cross of Jesus were his mother Mary wife of Clophas, his mother’s sister Salome, and Mary Magdalene.”

And while Jesus had a sister named Salome, I believe the Salome I’m writing of here has two sons who are perhaps close in age to Jesus’ brothers, as they’d be first cousins, so it wouldn’t be Jesus’ sister.

Mark 15:40:
“There were also women looking on afar off: among whom was Mary Magdalene, and Mary the mother of James and of Joses, and Salome.”

So here it could be speaking about Mary Magdalene, Jesus’ mother Mary, and his aunt Salome – his mother’s sister.

The most intriguing passage, if Salome (though not mentioned by name here) is viewed as Jesus’ aunt, his mother’s sister, is from Matthew 20:21:

“Then came to him the mother of Zebedee’s sons, kneeling down, desiring a certain thing of him. And he said to her, What wilt thou? She said to him, Grant that these my two sons may sit, the one on thy right hand, and the other on thy left, in thy kingdom.”

Jesus gently rebukes them and in Matthew 20:23, Jesus notes “..to sit on my right hand, and on my left, is not mine to give..” And in Matthew 20:24 it states “And when the ten heard it, they were moved with indignation against the two brethren.”

Though in Mark, they leave out “the mother of Zebedee’s children” and have the sons of Zebedee making the request of Jesus. (Mark 10:35)

This could be seen/interpreted to fit with your ‘Jesus Dynasty’, because she asks Jesus for special privileges for her sons (or else her sons do on their own, as per Mark), and if she’s Jesus’ mother’s blood sister, his aunt, she carries the same maternal royal bloodline as Jesus’ mother Mary, and thus her sons have the same bloodline as Jesus and his brothers and sisters, so they are part of the dynasty – a main branch of it.

Why else would she dare to ask Jesus such a thing? And she must have known Jesus well enough to be so bold. Not to mention, in those days, first off, women weren’t apt to speak to men unless they were part of the family in some way. Secondly, women at that time also weren’t likely to speak up like this, be so forward, and make such an (audacious) request of any man. Though if she’s of the bloodline of Jesus, as she’s his maternal aunt, it at least makes a bit more sense why she would ask this of her nephew, Jesus. Even if it wasn’t the ‘proper’ thing to do (thus the other apostles were annoyed. Perhaps some were actually envious?)

Mark 16:1:
“And when the Sabbath was past, Mary Magdalene, and Mary the mother of James, and Salome, had bought sweet spices, that they might come and anoint him.” (i.e., Mary Magdalene, Jesus’ mother Mary, and her sister, his aunt Salome.)

Thus, on the hypothesis that Salome is the sister of Jesus’ mother Mary, we can add Salome to the passage in the Gospel of Philip, so it makes more sense, or at least it causes one to read the sentences as separate statements, and not mistakenly conclude that three Marys “always walked with the Lord.” (thus I’ll split them up here):

“There were three who always walked with the Lord: Mary, his mother, and her sister Salome, and Magdalene, the one who was called his companion.”

“His sister and his mother and his companion were each a Mary.” 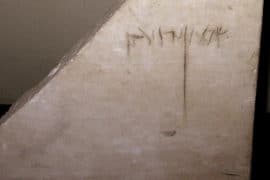 Was Simon Peter Buried in Jerusalem?
The Non-Sexual Life: A Misplaced Sense of Holiness 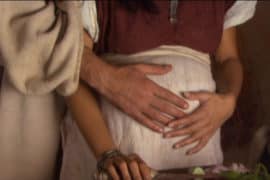