Then they arrayed him in scarlet, and when they had plaited it they invested him with a victor’s wreath made of thorn, and saluted him with, “Hail! King of the Jews!” (Mark 15:18). 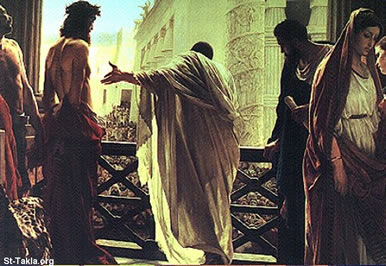 According to the gospel of Mark, when Jesus is on trial before the Roman Prefect Pontius Pilate he was asked if he claimed to be the “King of the Jews,” and his ambiguous answer was “You have said so,” which might be translated “as you say.” (Mark 15:2). Pilate then refers to Jesus as “the King of the Jews,” apparently echoing back a charge of Jesus’ enemies, that he claimed to be a “king”  (Mark 15:9, 12). [1]Such a claim would be considered the capital crime of lese majesty under Roman law, see Tacitus, Annals 4. 70; 6.7 Later that morning when the Roman cohort of soldiers gathered inside the Praetorium [2]See my post “Standing Again with Jesus: Ecce Homo Revisited,” here. to beat and mock their new prisoner, draping him with a purple robe and crowning him with a victor’s wreath of thorns, they saluted him, “Hail! King of the Jews!” (Mark 15:18). Finally, the placard upon which was written the charge against him, placed over his head on the cross, read “The King of the Jews” (Mark 15:26). [3]John has a significantly expanded version of this trial scene in Mark that seems to be more theologically reflective than “historical,” see John 18:28-19:21

What few Bible readers realize is that the claim to be “King of the Jews” was a highly charged political act of sedition or lese-majesty, considered a capital crime in Roman Law [4]See Tacitus, Annals 4. 70; 6.7. Robert Eisler in his classic work The Messiah Jesus and John the Baptist (1931) as well as S. F. Brandon, Jesus and the Zealots (1967) have thoroughly explored these political dimensions [5]Eisler, whose 1929 German edition was translated into English is long out of print but it can be found in most libraries and is available in a photocopy edition, see more here.

The emperor Augustus gave Herod the title King of the Jews and his connections with Rome and the emperor Augustus and his court were extraordinary. [6]See Peter Richarson, Herod: King of the Jews and Friend of the Romans (Philadelphia: Fortress Press, 1999. Throughout his long reign he desperately, but abortively, wanted to establish some kind of “dynasty” or royal line, as evidenced by his marriage to the Hashmonean princess Miriame. So obsessed was he with genealogical records that Josephus reports that he had the archives at Sepphoris destroyed lest any rivals challenge his pedigree or put forth their own. His son, Herod Antipas, tried much the same, seeking to forge royal connections through marriage and building his magnificent capital at Sepphoris, just a stone’s throw the northwest of the tiny village of Nazareth. Meanwhile, in Rome, Octavian, as the emperor Augustus, also sought to establish a dynastic line of succession by his adoption of Tiberius not long before his death. It seems that “Dynasties” were in the air in the 1st century CE Roman world.

I have collected books on Herod the Great for 30 years now and I find him endlessly fascinating and alluring as an historical figure, but much more so as a study in contrasts with that other “King of the Jews,” Jesus of Nazareth, crucified in 30 CE at Passover as a potential insurrectionist and heir to the royal throne of David. Unlike many of my colleagues in the area of Christian Origins who see Jesus as a healer, prophet-like figure, or teacher (all of which he surely was!), I have not the slightest doubt that he laid claim to the royal Davidic lineage and understood himself as the legitimate King of Israel or “messiah.”  [7]See my arguments in this regard in the article “Are You the One? The Textual Dynamics of Messianic Self-Identity,” in “Knowing the End from the Beginning: The Prophetic, the … Continue reading In my book, The Jesus Dynasty, I try to lay out the full implications of this understanding, one I consider key to recovering the “historical Jesus.” [8]If you have never read this book, published in 2006, I recommend it, modestly but highly! See https://jesusdynasty.com

Our earliest source for Jesus as a Davidic “Royal” comes from Paul (Romans 1:3). Indeed, I believe that the Davidic messianic claims for Jesus are an essential factor for any interpretation of the figure of Jesus in his own time and context. I am convinced the Messianic self-identity of Jesus opens up a world of understanding of both of the man and his movement, and that without it any interpretation of the historical Jesus fundamentally fails. I have always been a bit puzzled as when I have been asked–but why would you think Jesus thought himself to be of Davidic lineage, when my question would be the opposite–how could he have possibly viewed himself otherwise, given what we know of the movement, its beliefs, and its history? Teachers, prophets, and charismatic healers are one thing, but the coming of the “Messiahs of Aaron and Israel” was at the heart of Jewish expectations of the future under the rule of a succession of Herodian rulers who were considered to be corrupt in illegitimate kings. (See my unpublished paper here on the “Two Messiahs” concept).

I am further convinced that part and parcel of the Davidic lineage idea was that one was part of a dynasty, made up of brothers and sons. And this is what we find in the Jesus movement as James, the brother of Jesus, becomes his successor, and Simon, another brother (some say cousin but of the same royal lineage), takes the leadership at the death of James.  Yose, Jesus second brother after James, has apparently died by the time of the death of James in 62 CE or he would have likely been next in line. All of this evidence fits “hand-in-glove” with what we find in the “Jesus family tomb” at Talpiot. (See my overview “The Case for A ‘Jesus Family Tomb in East Talpiot: A Comprehensive Summary of the Evidence.” )

We known the splendor with which Herod was buried from the account in Josephus and the ruins of the Herodium, especially the more recent discoveries of my friend, the late Ehud Netzer. Jesus, in contrast, was crucified as a criminal and hastily and temporarily placed in a rock-hewn tomb near the place where he died. Joseph of Arimathea, who had taken charge of his burial, likely provided a more permanent tomb for Jesus, and perhaps for the rest of his family, shortly thereafter, see my exposition on this here. Like other Rabbis and teachers of the time we can expect the followers of this “Branch of David,” would have made sure he and his family were well taken care of, in death as in life. The elaborately decorated sarcophagus of Herod stands in sharp contrast to the plain undecorated ossuary of Jesus son of Joseph of the Talpiot tomb. That the Jesus of the tomb also has a son named Judah makes the entire Dynasty concept all the more dynamic.

Several years ago, standing in the parking lot of the condominium complex overlooking the Talpiot Jesus family tomb I suddenly realized, looking to the south, that the Herodium, which became Herod the Great’s fortress Tomb, was clearly visible in the distance. I thought to myself–how appropriate! The two men called “King of the Jews,” but for very different reasons and in very different contexts, buried within sight of one another!

Why the Royal Family of Jesus was Erased 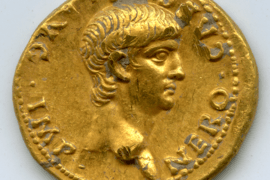 Rare Roman Gold Coin of Nero Found at Mt Zion Excavations!
The Making of a Messiah: Did Jesus Claim to be the Messiah and Predict His Suffering and Death?