It was about twenty years ago that I first began to combine my textual study of the historical Jesus with an in-depth interest in the archaeology of late 2nd Temple Jerusalem and Galilee as it relates to the life of Jesus. An obvious interest of mine has been to determine, if and where possible, the locations of various sites that are the settings of the basic gospel narratives. This interest actually goes back to 1962 for me–so a full fifty years ago, when I first visited Jerusalem with my family on a trip back to the United States from Iran where my father, an Air Force officer, had been stationed for the previous two years. One of my major interests, then as now, as I describe in the preface of my book, The Jesus Dynasty, was to ask the Sandburgian question–“What is this place, where are we now?” Back in 1962 there was precious little one could see in the Old City of Jerusalem–then a part of the Hashemite Kingdom of Jordan and forcibly emptied of its Jewish population–that could be reliably connected to our gospel narratives. Of course there were all the standard holy sites–the garden of Gethsemane, the Via Dolorosa, the Church of the Holy Sepulcher, and the Mt. of Olives, but even at that time I had read enough from the guidebooks to know that many of these places to which the Christian pilgrims flocked had little historical or archaeological basis, despite their devotional attractiveness to millions.

When one visits Jerusalem with such a focus one inevitably concentrates on what might be called “the Last Days of Jesus,” that final week, narrated in both the Synoptic gospels and John, that includes his daily excursions into the Temple court area, the guest house where he ate his last supper, the garden of Gethsemane, the various stages of his “trial,”–first before the High Priest Caiaphas at his residence, then Pontius Pilate, followed by Herod Antipas–the place of the execution by crucifixion, and the location of the nearby tomb where his corpse was temporary placed in haste. In almost every case I have found reason to question the traditional sites, many of which were settled upon in the 4th and 4th centuries CE, or even much later–in Crusader times. Today the landscape, both on the ground and under the ground has dramatically changed. There are a dozen or more sites to which one can reliably point that are connected to narratives in the gospels–from the recently discovered Pool of Siloam to the roadway and southern steps leading up into Herod’s Temple complex. It is today now possible again to “stand where Jesus stood” and “walk where he walked.”

Over the years, in now over 50 of trips to Jerusalem, I have studied the various sites and their traditions and my views have settled over time. I have given particular attention to the theories of the late Bargil Pixner, whose instructive book, With Jesus in Jerusalem has become a classic. I knew Bargil well and spent many pleasant hours with him on dozens of visits to Jerusalem.  I helped him edit two of his popular articles, both of which I have linked on my University Web site: Jerusalem’s Essene Gateway and The Church of the Apostles Found on Mt. Zion. I highly recommend these fascinating treatments even though Bargil and I held different views on several matters, especially the location of the Church of the Holy Sepulchre as the site of Jesus’ crucifixion and initial burial.  I have a photo from the early 1990s taken in Jerusalem where we were discussing some of these very matters. It is of great sentimental value to me. I came to love and respect Father Pixner very deeply. 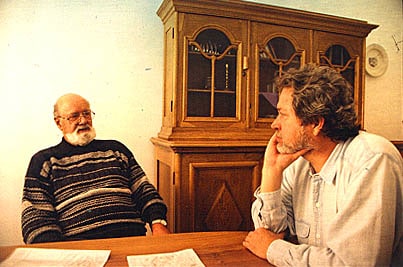 I have learned from various people over the years and I have continued to refine my conclusions, particularly in dialogue with my colleague, Shimon Gibson, whose remarkable book, The Final Days of Jesus: The Archaeological Evidence, represents one of the most up-to-date treatments of all the relevant issues. Gibson and I continue to have our differences, but his arguments for the location of Herod’s palace just inside the Western Wall of the Old City, with Pilate’s judgment seat just outside that wall I find wholly convincing.

Gibson locates this judgment seat of Pilate, the Roman governor, and the scene of the trial, just outside the western wall of the Old City, with the Praetorium inside the wall through a gate leading inside the palace (John 18:28). Gibson argues, and I wholly agree, that it is unlikely Pilate would be staying in the barracks of the Antonia Fortress, near the first station of the cross on the Via Dolorosa inside the Old City, which is the traditional location. I remember visiting that site as a teenager on my first trip to the Holy Land, maintained by the Sisters of Sion. I was profoundly moved as our tour guide narrated how Jesus was scourged and mocked in the courtyard of the Antonia, where the stone pavement, today known as the “Lithostrotos,” is still visible three meters below the present street level. At that time I had no idea this was surely the wrong place and that the tradition of the Via Dolorosa only went back to Crusader times.

As Gibson has shown, the governor Pontius Pilate, who preferred his residence at Caesarea on the Mediterranean, in town for Passover in April of 30CE, would have surely stayed in the complex of Herod’s palaces, on the luxurious western side of the city. I have marked the spot of the scene with a red square on this map, just to the west of the Old City wall: 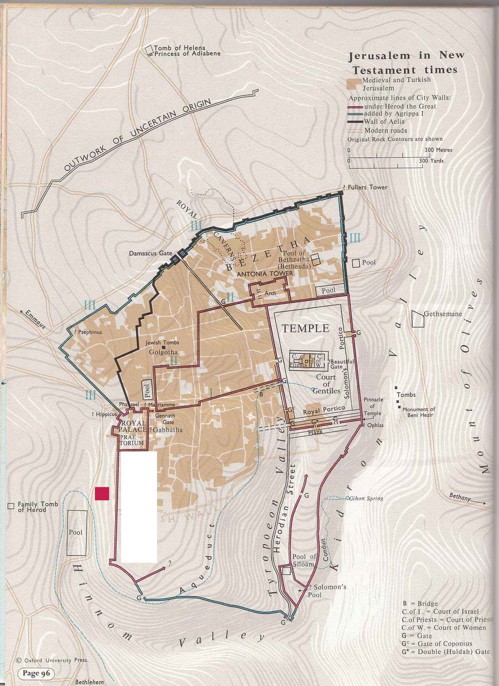 Although the Oxford map does not show it, the vast palace grounds would be just inside the wall, running south the entire length to the Hinnom Valley, as I have marked here in white. In the painting below, that artist Balage Balogh did for for The Jesus Dynasty, he puts the palace grounds just inside the wall and also shows the gate leading inside to the royal grounds: 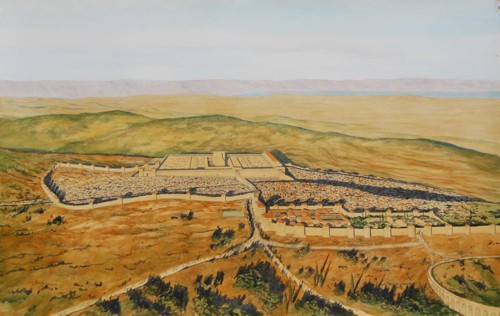 Here in the model of Herodian Jerusalem that has now been moved to the Israel Museum. You can see how the various buildings of the palace might have looked in their splendor, just inside the city wall. It was inside this area that Jesus was taken for his interrogation and scourging at daybreak the day he was executed. The crowd of his accusers waited outside, as they would be eating the Passover that evening (John 18:28).

Shimon Gibson helped to excavate this entire western wall area back in the 1970s under Magen Broshi. He has studied it in great detail and has been able to identify its main features. Of our four New Testament gospels it is John alone who seems to know the precise topography of the scene. The way this area looks today appears in the photo below. You can still see the steps, intact from Herodian times, leading up to the platform where Pilate sat and the area where the gate led into the Praetorium. The platform was called called Gabbatha (John 19:13) and the flat stones making up the floor are still in place. Following the interrogation inside Jesus was brought back outside on this judgment seat to face his accusers and it was here that Pilate uttered his famous words: Ecce Homo–Behold the Man! Jesus was then taken down these steps and led to the place of crucifixion, outside the city walls–which for reasons I will not elaborate here I argue was near the summit of the Mount of Olives.

Balage Balogue produced this wonderful painting that accurately reconstructs how things would have looked. He did a great deal of research on the archaeology of the site based on Gibson’s findings, as well as careful attention to clothing and other features: 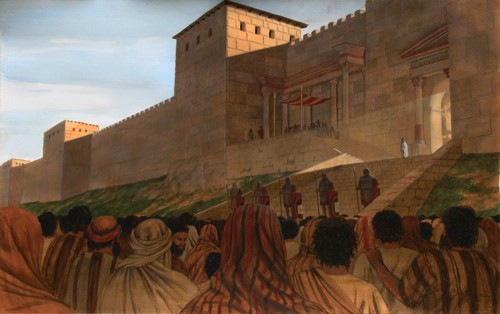 Whenever I read the gospel accounts of the trial of Jesus before Pilate, especially in the gospel of John, I have these images and pictures vividly in my mind. It is one of those rare juxtapositions between imagination, place, and text. I hope some of my readers can manage to visit this site someday. In my estimation it is truly holy ground and as yet it is pristine and untouched by church, shrine, or tourist vendor.

Locating Golgotha
What’s What Regarding the Controversial James Ossuary? 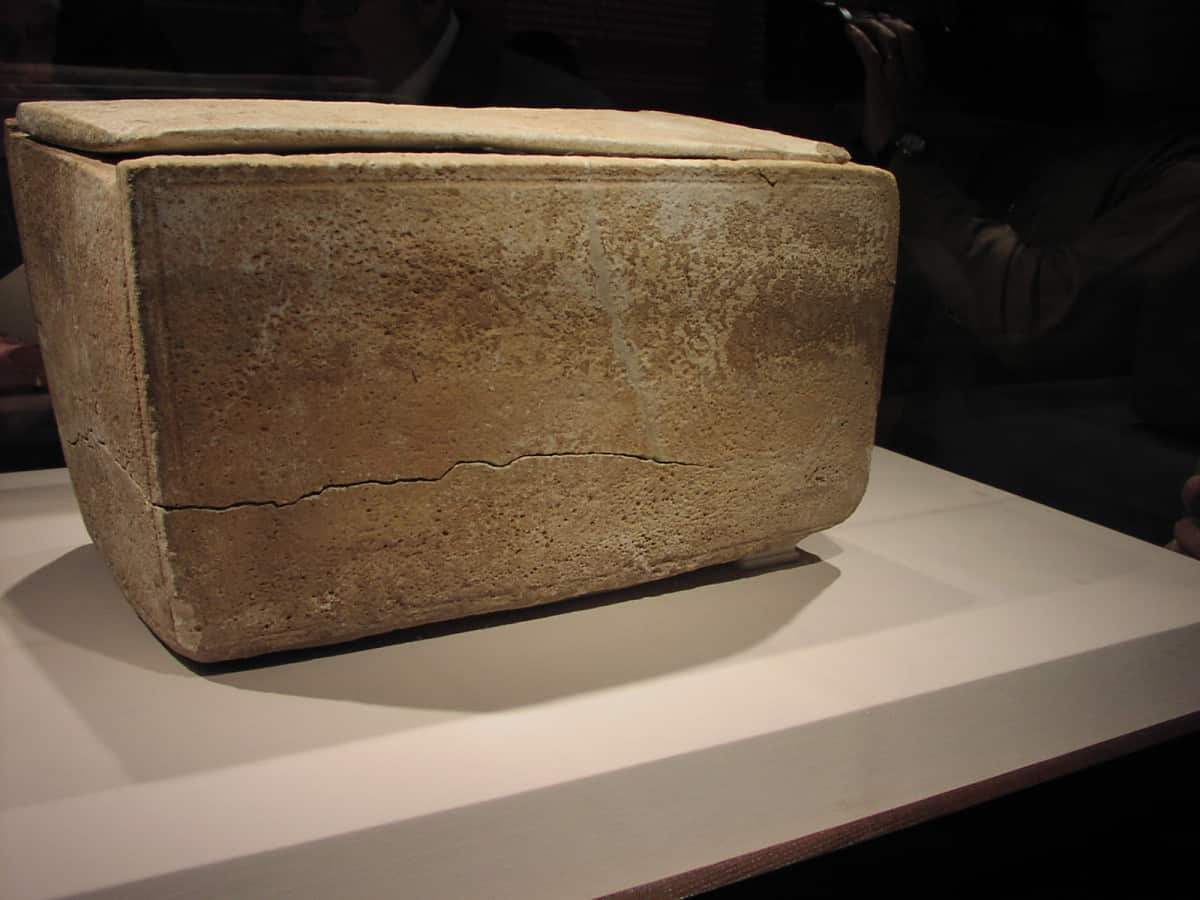