Millions were introduced to the famous “Ark of the Covenant,” if not in Sunday school growing up, then through the blockbuster 1981 “Raiders of the Lost Ark” Indiana Jones film. The familiar image of the gold plated ark with its angelic “cherubim,” and quasi-magical powers has become legendary, part of our “pop” culture. 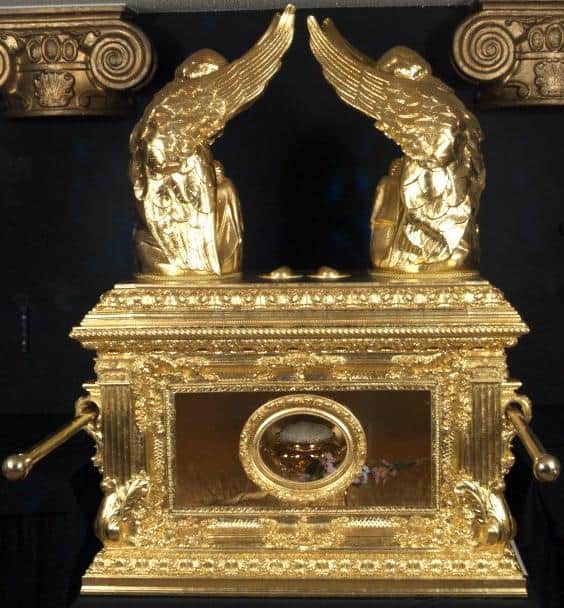 What few realize is that in the Torah or “Five Books of Moses,” there is another ark described, one that is  completely different from the gold-plated creation of movie fame.  It is described only in the book of Deuteronomy. The world “ark” comes from the Hebrew ‘aron/ארן, that means literally a “box” or “chest.” It is used for a coffin in Genesis 50:26, in connection with the embalmed corpse of Joseph, subsequently buried in the Holy Land (Joshua 24:32). According to the Torah, the traditional gold-plated “ark” or chest, with the mysterious twin cherubim, was crafted by Bezalel who was said to have been given special ability to shape such a lovely object (Exodus 36-37). It is consistently called the “ark of the Testimony,” a dozen times throughout the Priestly traditions of the Torah (beginning in Exodus 25:16 and running through Exodus 25-40) and associated with the Tabernacle and its construction.

Another “ark” or “chest” is mentioned in Deuteronomy 10 in an entirely separate tradition that can not be confused with the legendary Golden Ark in either its appearance or the circumstances of its construction. This “other” ark, was made by Moses himself as described in Deuteronomy 10:

One gets the impression in this text that the Ten Words (traditionally known as the Ten Commandments) were written on two tablets of stone of a size that Moses could carry in his hand. Accordingly, the chest to hold the tablets, here described, sounds like it might be of a similar size–in other words, a small wooden container that one could carry by hand. This is far different from the better known gold-plated version that measured 5 x 3 x 3 feet and was carried on poles by two men. It is possible that this “first ark” or chest was placed inside of the larger one, so that the tablets were imagined to be encased in a kind of double receptacle. Or more likely in my view, the two arks come from entirely different traditions–one associated with the Priests, the Tabernacle, and the sacrificial system, the other associated wholly with the tablets of the Ten Words, and subsequently the “scroll of the Torah” written by Moses, and a “tent of meeting” set up outside the camp that was wholly for direct revelation between Moses and Yahweh (Deuteronomy 31:26; Exodus 33:7).

This other ark, which might be called the “first” ark or box, serves to remind us that the sole purpose of the “chest” in the first place, small and simple or large and elaborate, was to hold the stone tablets with the “Ten Words,” known as the “Testimony.” In other words it was a container, nothing of itself without its special contents. One can search in vain for any illustration or painting of this smaller ark. It simply does not exist. The entire focus, when it comes to the “ark of the covenant,” is upon the second one, the golden-plated version of movie fame which unfortunately became an object of veneration in and of itself. One might imagine it looking something like this:

The question of what happened to the Ark of the Covenant is one fraught with mystery and intrigue. Academic opinions range from “it is legendary and never existed” to it was most likely destroyed by the Babylonians in the siege of Jerusalem in the 6th century BCE. So far as texts go, the ark is last mentioned in the Hebrew Bible in the time of Josiah in the 7th century BCE (2 Chronicles 35:3).

If one brings in mythology and legend then the ark’s whereabouts have been proposed all over the globe, from Ethiopia, to the Judean desert, to the warehouse in Washington, D.C., as per the famous last scene in the film “Raiders of the Lost Ark.” See Eric Kline’s book, From Eden to Exile chapter 6 on the “Ark of the Covenant.” Some Rabbis in Jerusalem, associated with the Western Wall and Tunnel north of the Temple Mount, say the ark is still hidden until this day under the Temple Mount. There is a place along the Western Wall tunnel that is marked as precisely opposite the Holy of Holies where people pray. It is considered the holiest spot on the planet for that reason–since it is as near as one can get to the hidden Ark. One evangelical Christian ark hunter claimed he had in fact seen the ark in a cave under “Gordon’s Calvary” near the Garden tomb just north of the old city of Jerusalem. The Wikipedia article “Ark of the Covenant” adds dozens of other potential locations in Europe, Africa, and the United Kingdom. So far as I know all of these legends and claims lack any kind of historical foundation and are just that–legends.

In terms of ancient sources as opposed to modern legends, we have the intriguing story found in 2 Maccabees 2:1-8 (considered part of the Old Testament Canon by the Catholic Church). Of course many would consider this ancient “legend” just as historically questionable as modern ones. The text relates that the prophet Jeremiah took the ark and hid it in a cave in the area between the mountains of Pisgah and Nebo, where Moses was buried. The author purports to base his account on an ancient document, no longer extant. Here is the text in full, for those without the books of the Apocrypha handy:

It was also in the document that the prophet, having received an oracle, ordered that the tent and the ark should follow with him and that he went out to the mountain where Moses had gone up and had seen the inheritance of God. Jeremiah came and found a cave dwelling, and he brought there the tent and the ark and the altar of incense; then he sealed up the entrance. Some of those who followed him came up intending to mark the way but could not find it. When Jeremiah learned of it, he rebuked them and declared, “The place shall remain unknown until God gathers his people together again and shows his mercy. Then the Lord will disclose these things, and the glory of the Lord will appear, and the cloud, as it showed itself to Moses, and as Solomon prayed that the place be specially sanctified”(2 Maccabees 2:2-8).

This is in Jordan today, along the northeast shores of the Dead Sea–right across from Qumran where the Dead Sea Scrolls were found. One has to wonder, given this description, whether the document the author claims to be quoting had in mind the large and heavy “gold-plated” version of the ark or the smaller, more simple, wooden box that the Torah says Moses made himself–something Jeremiah could have easily carried.

Speaking of Jeremiah, he is also the singular prophet who declares that in the future age of the New Covenant, when all the tribes of Israel are restored, the Ark of the Covenant will “not come to mind, or be remembered, or missed; it shall not be made again” (Jeremiah 3:15-18). For Jeremiah both the ark, as well as the Temple with all its sacrifices, had become the focus of a misguided devotion to Yahweh that ended up being a form of idolatry (see Jeremiah 7:1-26).

Just as with the poor, the “hunters of the ark” will always be with us and various sensational stories of its whereabouts, or even its discovery, will continue to intrigue the masses. After all, after the blockbuster film and spin offs from  “Raiders of the Lost Ark,” any ark story of any kind guarantees instant headlines. But one thing seems sure–no one will be interested in a story about the crude wooden box of Moses, that “other” ark that is the focus of the book of Deuteronomy. It will always be that golden box with the Cherubim, generating mysterious and dangerous “power,” that will draw the headlines.

Why Jesus and his Apostles Never Received a “Christian Baptism” Prof. Strange’s Review of The Jesus Dynasty (Part 3)
The Top Seven Fateful Verses from the New Testament (1) “Jewish Bloodguilt” 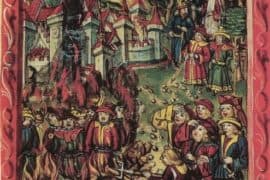