I just heard via Jack Sasson the sad news of Prof. John Howard Schütz’s passing. John was professor Emeritus in the Department of Religious Studies at the University of North Carolina at Chapel Hill. His obituary from the Raleigh News and Observer is archived here. What follows is a much more personal reflection.

John was severely brain damaged in a bicycle accident in 1985, at the prime of his career.  He received his MA and PhD at Yale Divinity School and spent a year in Germany in the late 1950s as a Fulbright Scholar. He also spent a sabbatical year at Oxford University at Jesus College in 1972-73.  After that, he published his first book, Paul and the Anatomy of Apostolic Authority, which was initially published by Cambridge and subsequently by Westminster John Knox Press. He was in the process of writing a second major scholarly book when he had his accident. John’s scholarly contributions before his accident were many and he was one of the most insightful and brilliant scholars I have ever known. His emphasis on the social world of Paul was one that informed the scholarship of so many of us in the 1970s through the “Social World of Early Christianity” SBL sessions inspired by Wayne Meeks, Abraham Malherbe, and others.

I  first knew of John Schütz as a graduate student at the University of Chicago in the 1970s through his book Paul and the Anatomy of Apostolic Authority that was a very important influence on my own work on Paul, subsequently published as my dissertation, Things Unutterable (University Press of America, 1986) and now revised as Paul’s Ascent to Paradise and once more available. I first met John face-to-face in 1985 after moving to the College of William and Mary as a young visiting Assistant Professor of New Testament. I regularly attended an informal South East regional group we called SCRAM (Study of the Culture and Religion of the Ancient Mediterranean) that would meet at various locations once or twice a year–Chapel Hill, William and Mary, Duke, etc. It was a wonderful group with the likes of Robert Wilken, Tom McCollough, Dale Martin, Tom Finn, Bart Ehrman, David Halperin, Robert Gregg, Elizabeth Clark, and many others sharing recent research and socializing together. When I took the position here at UNC Charlotte I continued to be a committed part of the SCRAM gatherings. The group sadly and gradually faded out and John’s accident was a huge blow to all of us.

Just after I published my book Paul and Jesus in 2012 I had an email from John’s daughter, Amy Kelso, who is an attorney with UNC Charlotte. She had read about the book and thought her father might enjoy reading it. I shipped her an inscribed copy and she gave it to him that Christmas. Amy told me at the time that John’s short term memory was gone but remarkably, his long term-memory remained and she thought he would enjoy reading my book in “spurts.” John spent his last years in a retirement community with his wife who remained his sole caregiver these many decades.

I am sad to learn of John’s passing. All who knew him will understand the great respect and affection I had for him as a human being and an amazing scholar. 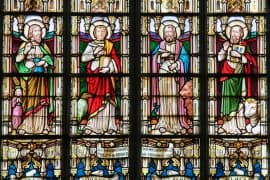 Priority Does not Mean Primacy: The Gospels of Mark and John
Talpiot Tomb or the Church of the Holy Sepulcher?