Few readers of the English Bible realize that the name “James” actually comes from the Hebrew name Jacob or Yaaqov, which adds to the confusion over the various “Jameses” mentioned in the New Testament. There is, of course, Jacob the Patriarch, grandson of Abraham; James the Apostle, the fisherman brother of John and one of the two sons of Zebedee (Mark 4:21); “James the Less,” and several others. Ironically, the most obscure, and surely the most important James as “James the brother of Jesus,” known subsequently as “James the Just.” Getting our “Jameses” straight takes a bit of analysis. You can read my own attempt to sort through the names in my post “Getting our ‘Jameses’ Straight,” as well as the extensive series “The Forgotten Brother of Jesus.”

Our earliest reference to James the brother of Jesus, surprisingly, comes not in our New Testament gospels but in the letter of Paul to the Galatians. There he recounts his first visit to Jerusalem after his vision of “Christ,” where he says he had an audience with “James the Lord’s brother,” the leader of the Jerusalem followers of Jesus (Galatians 1:18-19). He goes on to list this James, along with Cephas or Peter, and John–presumably the fisherman son of Zebedee–as the “pillars” of the Church. Given the later reputation of Simon Peter as the titular head of the Church and in Catholic tradition, the first “Pope” or bishop of Rome, this listing of James first, ahead of Peter, comes as a surprise to many, though the primacy of James the brother of Jesus is well attested (Acts 15:12-21; Galatians 2:11-12; Gospel of Thomas 12; Eusebius, Church History 2. 1. 3). For more of the core primary textual sources on James see “Primary Sources on James the Just,” and “Essays on James the Brother of Jesus.”

Sometimes a picture is worth a thousand words, as the saying goes. This painting acquired from a private dealer in Italy in 1811 and now in the National Gallery of Art Collection in Washington, D.C., is by an unknown artist who was apparently influenced by Cimabue (1240-1302), the great Italian painter of Florence. Cimabue is known for his move away from flat and stylized Byzantine art toward a more naturalistic attempt to portray feeling and emotion. This painting with Jesus in the center, flanked by Peter and James the brother of Jesus, seems to say it all. Notice how James is almost a “twin” of Jesus, both in expression, hair style, clothing, and general demeanor, whereas Peter is clearly “odd man out” in terms of the way he is portrayed. He even seems to be scowling over at James, perhaps jealous of his status and closeness to Jesus. This negative caricature of Peter is also found, as I have recently noted, in the Gospel of Mary Magdalene, see here, in which Peter is jealous of the intimacy and wisdom Mary apparently received from Jesus that seemed to put her above the traditional leaders among the Twelve Apostles. One has to wonder what this unknown artist knew or thought he knew about the complexities of early Christian leadership and any possible rivalry between Peter who is associated more with Rome and the West, and James the Brother of Jesus who receives great emphasis in the East–particularly among the Armenian Christians. 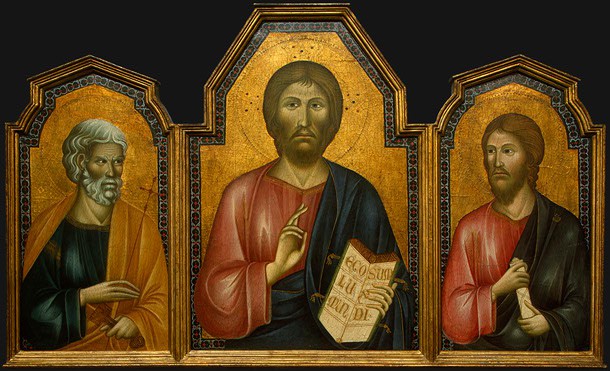 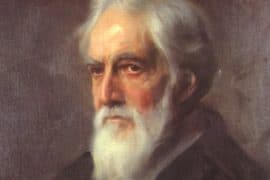 Remembering Sir Flinders Petrie
Blast from the Past: The Hidden Face of God 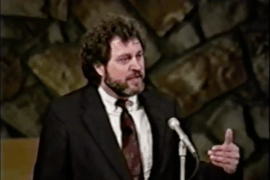