I dedicated my book, The Jesus Dynasty to the memory of Albert Schweitzer, who was born 140 years ago this month: 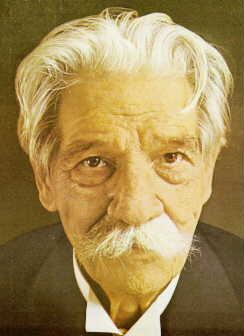 Albert Schweitzer’s influential work titled Von Reimarus zu Wrede was published in 1906—just one hundred years earlier. The better-known and brilliantly titled English edition, The Quest of the Historical Jesus, came out in 1910 (translated by W. Montgomery with a preface by F. C. Burkitt).

Schweitzer opens his rather dense 400 page survey of historical Jesus research down to his own time with the sentence: “Before Reimarus, no one had attempted to form a historical conception of the life of Jesus.” He refers of course to Lessing’s anonymous publication of Hermann Samuel Reimarus’s writings in 1778, in particular the fragment “Vom dem Zweke Jesu und seiner Jünger” (“The Aims of Jesus and His Disciples”) of which he says “This essay is not only one of the greatest events in the history of criticism, it is also a masterpiece of general literature.” (p. 15). Schweitzer knows his heroes over the next 128 years and he celebrates them exuberantly.

Schweitzer focuses on what he calls “three great alternatives” that historical research on Jesus had to meet. The first he calls the “purely historical or purely supernatural.” This he considers decisively settled by David Friedrich Strauss’s first “Life of Jesus” published in 1835. The second had to do with determining the priority of Mark and the Synoptic tradition over John’s gospel, which he sees as satisfactorily worked out by the Tübingen school and Holtzmann. And finally, most important, what he calls the eschatological question. Here his hero is Johannes Weiss with the publication of his work on the preaching of Jesus concerning the kingdom of God in 1892.

In Schweitzer’s final and most important chapter he argues that the union of what he calls “thoroughgoing skepticism” and “thoroughgoing eschatology” represents an impassible and enduring obstacle to traditional Christian theology. Jesus, according to Schweitzer, “lays hold of the wheel of the world to set it moving on that last revolution which is to bring all ordinary history to a close. It refuses to turn, and he throws himself on it. Then it does turn; and crushes him” (p. 370-71). And yet, even with this perspective, this “negative theology” as Schweitzer calls it of a “failed messiah,” he leaves the reader with his final chapter that he calls “Results.” He writes that “Jesus means something to our world because a mighty spiritual force streams forth from him and flows through our time also,” and “…it is not Jesus as historically known, but Jesus as spiritually arisen within men, who is significant for our time and can help it. Not the historical Jesus, but the spirit which goes forth from him and in the spirits of men strives for new influence and rule, is that which overcomes the world.” (pp. 399, 401). 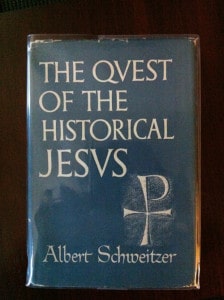 Apocalypticism and apocalyptic ways of thinking and living in their late 2nd Temple Jewish manifestations focus on the imminent “end of the age” and the wholesale overthrow of the powers that be, both visible and invisible. From the standpoint of the apocalyptic group it involves nothing less than a “cosmic takeover” through the power and agency of God, followed by a new world order, namely the rule of God and the triumph and vindication of the people of God. It has a clear linear and temporal focus, but the (normally) unseen heavenly world of Satan, the demons, and the corrupt state of the cosmos are an essential and ever present foreground. John the Baptist, Jesus, James, Peter, and Paul all lived and violently died with this imminent hope of cosmic reversal on their lips. What they most expected to happen never came about, and what they could have never imagined, namely the 2nd century AD heyday of Roman glory and power, and the terrible destruction of Jewish life in the land of Israel, became a reality. This is and remains the fundamental historical reality. So what are we to make of this disappointment and failure?

With Schweitzer I see Jesus as a full and willing participant and key agent in these failed apocalyptic hopes and dreams. Without discounting the important ways in which Jesus’ message that the “kingdom of God has come upon you,” reflected a “realized eschatology” with revolutionary social and political implications “here and now,” (as per Crossan, Borg, Wright), I nonetheless want to face squarely the stark implications of all those bodies that did not rise, and those dead messiahs who never returned. When prophecy fails, particularly prophecy grounded on the interpretation of authoritative texts, there are three classic responses: postponement, marginalization, and allegorizing, namely–the end is not as near as we though–thinking about the end should be abandoned–or, the end did actually arrive, but not in the way we expected. On one level each of these is an attempt to affirm that failure is actually success and what seems to be defeat and disappointment is victory.

There are of course ways, perhaps commendable ones, in which the ancient language and imagery of apocalyptic thinking might provide powerful symbolic expression to the human struggle against evil and the hope of a transformed world. But I would want to sharply distinguish between the symbolic and the operational, and between projection and agency. It is one thing to imagine and hope, it is quite another for individuals and groups to radically alter and shape their lives and choices based on what they expect to happen (i.e. Paul’s advice to his followers not to get married since the end is near!). All bone fide apocalyptic movements carry with them profound social and political implications and more often than not, as Cathy Wessinger has reminded us, the “millennium” comes violently. 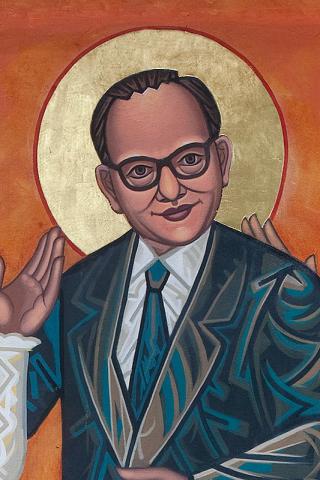 The late Norman Perrin, my New Testament professor at the University of Chicago, used to tell us that there was one thing certain in the study of the long history of Jewish and Christian apocalypticism—a 100-percent failure rate. H.H. Rowley published a collection of essays that he had delivered in 1942, during the darkest days of WWII, titled The Relevance of Apocalyptic. Rowley never discounted the symbolic power and potential theological meaning of apocalyptic symbols. But he offers at one point an astute observation. At the time, Hitler had taken most of Europe and General Rommel had orders to march to Jerusalem, link up with the Arab allies and crush the Zionists once and for all. One could hardly imagine a better candidate for the Beast than Nazi Germany with its Führer. In both the United States and Britain, the Bible prophecy movement was having a heyday. Rowley wrote:

Clearly historians who see Jesus as an apocalyptic visionary are not advocating a literal appropriation of the thought world that Rowley here censors. On the other hand, even Schweitzer, in his final chapter, with all his thoroughgoing skepticism and thoroughgoing eschatology, cannot resist a bit of theologizing, or perhaps sentimentalizing, of his own.

Although Schweitzer deals with an apocalyptic Jesus, he also wrote a magnificent book on Paul–The Mysticism of Paul the Apostle, still in print and well worth reading. In many ways I find it the best book on Paul of the 20th century. My own work on Paul, Jesus and Paul, owes more to Schweitzer than any other scholar. Paul is our earliest and most direct source for the kind of apocalyptic thinking that characterized the Jesus movement up through the end of the 1st century CE. For me at least the unmistabably  “apocalyptic Paul” is also our best avenue to recovering anything reliable at all about Jesus.

Broadly speaking Paul presents a Hellenistic way of salvation—a particular scheme of apotheosis, or “immortalization,” set within the parameters of late 2nd Temple Jewish apocalypticism. The broad contours of his religious experiences—epiphany, the reception of oracles, visions, the journey to heaven, secret revelations—these are all well known to us, especially from the Greek magical papyri, the Hermetic texts and various forms of esoteric Judaisms of the period. Add to that his specific expectations regarding his mission to the Gentiles, the conversion of Israel, and the imminent parousia of Jesus as cosmic Lord, and you have it—his own particular vision and version of that most general Hellenistic (and human) hope—escape from mortality and the cosmic transformation of the world. And yet it is those very apocalyptic “particulars” that make Paul really Paul. His was not a scheme of salvation for any place or for all time. Although he has endured and been appropriated in many different ways over the centuries, from the standpoint of the history of Judaism, he belongs in those crucial years of hope and promise, before the terrible days of August, 70 CE, when many such dreams came to an end as the Romans crushed the Jewish Revolt, destroyed the Temple and the city of Jerusalem, and locked down the Jewish population in Galilee and Judea with an overwhelming military occupation force.

For Paul the “appointed time” of the End had drawn very near (1 Cor. 7:26, 29, 31). How near, it is difficult to say, but he wrote that in the early 50’s CE. If he, like others in the movement before 70 CE, expected the fulfillment of Daniel 11 and 12, with the “desolating sacrilege” set up in the Temple at Jerusalem, then events such as Gaius’s attempt to have his statue placed there (41 CE), and Nero’s persecution of the Christians in Rome, would have fired the apocalyptic speculations of the movement to a white hot temperature (witness Mark 13). Apparently his plans to go to Spain never worked out, due to his arrest under Nero (Rom. 15:28), so his grand hope of bringing the bulk of Israel to accept Jesus as Messiah through his Gentile mission became more and more hopeless. By AD CE it was becoming increasingly difficult to maintain any immediate hope for the “redemption of Israel.” Others would pick up the pieces in various ways, but Paul was gone and what emerged in his name, even in the short decades after 70, was the beginning of a new and very different story. 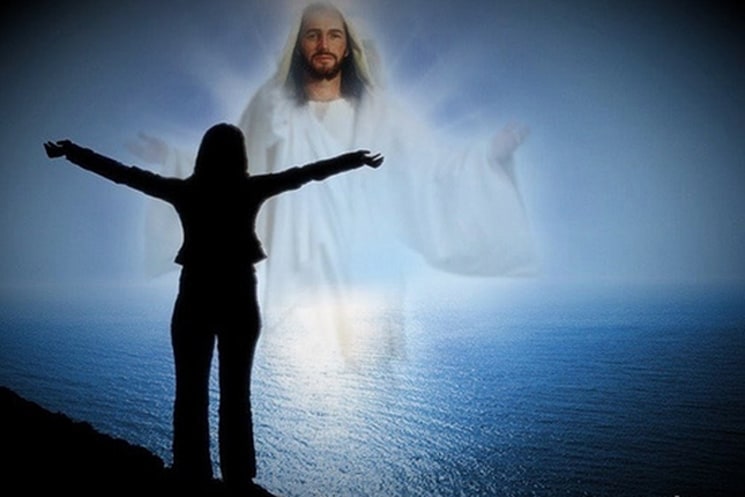 Praying to Jesus: From Jewish Messiah to Incarnate God
The “Jesus son of Pantera” Traditions