Okay, the expression is overused, but I like it: “When it rains it pours…” If you have been keeping up with the news, both in international media breaking headlines, and in the academic world of biblical studies and blogs–it is all about Dead Sea Scrolls–present and past discoveries.

The present is the sensational new discovery of Dead Sea Scroll fragments of the biblical books of Zechariah and Nahum found in the “Cave or Horrors,” south of Engedi, see New York Times coverage with hundreds of stories and videos worldwide, “Israel Reveals Newly Discovery Fragments of Dead Sea Scrolls, as well as the nicely illustrated Jerusalem Post story here, and the Times of Israel here.

The past is 145 years ago–when Jerusalem antiquities and manuscript dealer Moses Shapira first presented his “Deuteronomy strips,” reportedly found by Bedouin in a cave on the east side of the Dead Sea in Wadi Mujib (the biblical Arnon), to European scholars. These leather manuscripts, folded rather than rolled, had been wrapped in linen and had a sticky substance coating them–from the deterioration of leather–just like the famed Dead Sea Scrolls found in Caves in 1947-1952 by Bedouin and dated to the 1st centuries BCE/CE. The problem is, in the 1880s, no one could even imagine such writings surviving over millennia, and most European scholars ended up rejecting the Shapira texts as forgeries–whether created by Shapira or another. After 1947 all that changed. Calls for reassessment of the Shapira Scrolls surfaced in the 1950s, with the matter debated back and forth (Mansoor, Goshen-Gottstein, Rabinowicz, Teicher, Allegro, Cyrus Gordon, Jefferson, and Reiner).[1]Menahem Mansoor. See The New York Times (August 13, 1956) and The Jewish Chronicle (London) (December 28, 1956). Mansoor’s research is presented best in his article online here:  “The Case of … Continue reading

Two essentials: Sabo’s documentary, “Shapira and I,” who lays out the basic story accurately along with his 30 year the hunt for the scrolls, with considerable advances. And Shlomo Guil’s 2017 article in PEQ. Guil presents a fresh and comprehensive “up to date” look at the whole case, pro and con, offering a number of new insights that really change the whole discussion. Unfortunately, so many discussing the Shapira case just the past week, academics included, apparently remain ignorant of Sabo’s work as well as Guil’s groundbreaking article–and it is on-line here:  “The Shapira Scroll Was an Authentic Dead Sea Scroll.” Palestine Exploration Quarterly 149, no. 1 (2017): 6–27.

And then last week everything changed:

Two major new books dealing with the Shapira Scrolls were published just two weeks apart, both of which argued for authenticity, offered new previously unpublished research relevant to the forgery case, and both presented a  reconstructed transcription and translation of the texts so a new generation of scholars and readers can access the content more readily. Neither of the authors knew of the work of the other, though their conclusions are similar on many points.

Ross K. Nichols, The Moses Scrolls: Reopening the Most Controversial Case in the History of Biblical Scholarship (St. Francisville, LA: Horeb Press, 2021). [2]Nichols is part of a group of dedicated “Shapira” researchers who have been carrying on their investigative work for decades, sharing information and updates along the way, including … Continue reading

In the case of Professor Dershowitz, the New York Times offered a nicely comprehensive story by Jennifer Schuessler delving into all of the main issues surrounding these contested manuscripts, see “Is a Long-Dismissed Forgery Actually the Oldest Known Biblical Manuscript?” In the case of Nichols he relates here, on his blog, his own odyssey as a “Shapirologist,”, see “A New Call for a Reassessment of Shapira’s Manuscript.”

Since then it is hard to keep up with all the responses. Just as a start I would note:

Christopher Rollston’s blog post “Deja Vu all over Again” with lots of comments back and forth from dozens of scholars. Dershowitz has offered brief responses to Rollston and others commenting on his Twitter feed, well worth following. Nichols has a new post up, also in response to comments about Shapira and the Siloam inscription, that offers a lot of new and useful information, “Shapira and the Inscription of Siloam.”

Nichols has also continued to blog on aspects of the ongoing discussion: “Shapira and the Siloam Inscription,” and “Did Shapira’s Manuscript contain Ten or Eleven Commandments?”

And most recently, Jonathan Klawans has weighted in via Biblical Archaeology Society’s “Bible History Daily” newsletter and on line: “The Shapira Fragments.” Jonathan does not appear to have taken into account Idan Dershowitz’s main arguments and he quite readily identifies Moses Shapira as not only the forger, but suggests his motive was to promote “Christianity.” Clearly Dershowitz’s analysis would undermine both ideas. What Jonathan suggests, however, is intriguingly circular–a classic chicken and egg dilemma.  As a scholar of Christian origins, I think it is entirely possible that the Jesus movement was indeed influenced and affected by a version of the Torah such as this, and Ebionite sources say this explicitly, comparing the materials they judge to be added to the Torah to the “tares” sown among the good seed in the parable of Jesus.  They quote Jeremiah: “The false pen of the scribes has made the Torah a lie” (Jeremiah 8:8). Thus we get sayings of Jesus like: “Unless you cease sacrificing, the wrath of God will not cease from you,”  and others, even in our New Testament gospels, that imply an “originalist” orientation in the mouth of Jesus–“from the beginning it has not been so,” “Go learn what this means: I desire mercy not sacrifice,” “Whoever looks on a woman with lust has already committed adultery in his heart,” “the Sabbath was made for man” and quite a few others. See my class handout: Nazarenes and Ebionites. for some basic background on subsequent Jewish-Christian sources.

And the discussion continues…I will weigh in myself along the way, as I think there are some very decisive arguments for authenticity that have been overlooked. I also think we have a good chance of recovering the scrolls, or portions thereof, and solving a lot of our questions–especially through scientific dating methods.

Ironically, one of the newly discovered fragments of Zechariah is preserved in Greek, but with the name of God–יהוה/YHVH written in paleo-Hebrew, as we find in other Hebrew and Greek texts among the Dead Sea Scrolls. The passage echoes a version of the Decalogue, independent of Exodus and Deuteronomy, that could well be related to the discussion of the Shapira Valediction of Moses, that Dershowitz covers in his book: “These are the things that you shall do: Speak the truth to one another, render in your gates [new fragment reads “streets”] judgments that are true and make for peace, do not devise evil in your hearts against one another, and love no false oath, for all these things I hate, says the LORD” (Zechariah 8:16-17). 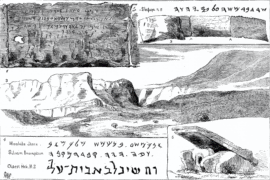