Everyone repeats endlessly that “Jesus was a carpenter.” Hey even Kris Kristopher has a song that begins that way, and one sees bumper stickers about following a “Jewish carpenter” all the time. Did you know that the reference to Jesus having such a trade only occurs one time in all our the gospels accounts. Here is that single verse:

Is not this the carpenter, the son of Mary and brother of James and Joses and Judas and Simon? And are not his sisters here with us?” (Mark 6:3) 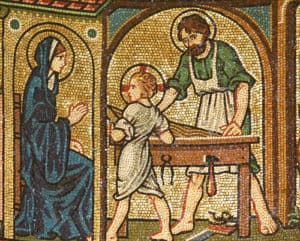 Strangely, Matthew, following Mark’s story here shifts this to “Is this not the carpenter’s son?” (Matthew 13:55), with Joseph unnamed–which is quite an intriguing. It is hard to imagine how such a dominant image of Jesus working with saw and hammer in a wood shop hangs upon so tiny a thread.

As it turns out, the word in Greek (tekton/τεκτων), that Mark uses here, translated commonly in English as “carpenter,” is better translated more generically as “builder,” and might just as easily refer to a stone mason. If one looks at the various stories Jesus tells as parables and analogies, related to his message of the Kingdom of God, the image of a stone mason or builder is dominant–even down to the details of how to plan, finance, and properly lay a solid foundation for a substantial building or tower (Luke 6:46-49; 14:29-30). Whether he was a skilled day laborer, a contract worker, or perhaps, even a managing contractor, we have no way of knowing. One thing we do know is that the magnificent city of Sepphoris (Tspori in Hebrew), that Josephus calls the “jewel of all the Galilee,” was being rebuilt by Herod Antipas as his capital during the years Jesus was growing into manhood (10-20 CE). Nazareth, a village suburb, less than four miles to the southeast, would have been caught up in the economic building boom spurred by this major project. It is quite easy to imagine Jesus, his adopted father Joseph, and his brothers as they came along in age, working in the building trades in Sepphoris. This is quite a different picture than the quaint romanticized image of little Jesus working in his father Joseph’s wood shop, so often pictured in family Bibles.

A Historical Historical Look at the Birth of Jesus (Part 5 Conclusion)
In Memory of Her: Mary’s Forgotten Memorial 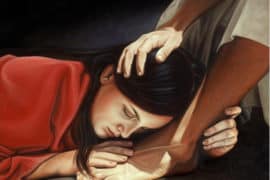