So much has been in the media over the past two decades on the 1993 Waco tragedy with a plethora of new TV specials marking the 25th anniversary in 2018. Sorting through the mass of information is a daunting task. In terms of the older productions I recommend in particular “Waco: The Rules of Engagement” (1997) and Waco: A New Revelation (1999), the former of which was nominated for “Best Documentary” at the Oscars. Of the more recent productions, including CBS, ABC, and A&E I can only recommend A&E “Waco: Messiah or Madman,” the others are in my judgment utter failures as propaganda pieces for the standard narrative: Evil crazy cult leader David Koresh is to blame for the deaths of his fanatical brainwashed followers.

The Paramount scripted series, “Waco,” directed by Drew and John Dowdle is currently airing on the Paramount TV network (formerly Spike TV). I have only four of the six episodes but so far it appears to be a really moving and impressive production the is trying to be fair to all sides of the story–particularly in putting a human face on both the Branch Davidian and the FBI negotiators. 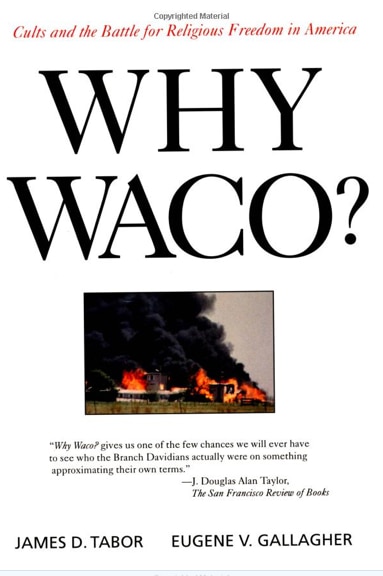 There are quite a few excellent books I would recommend, including Dick Reavis, Ashes of Waco, David Thibodeau’s Waco: A Survivors Story, Clive Doyle and Catherine Wessinger, A Journey to Waco: Autobiography of a Branch Davidian, and my 1995 co-authored book with Eugene Gallagher, Why Waco: Cults and the Battle for Religious Freedom in America.

Here is a checklist of topics and issues that I have found to be most commonly propagated misconceptions and falsehoods regarding what really happened at Waco and what went wrong.

1. The Raid: The initial violent and aggressive BATF raid on the Mt. Carmel community, dubbed “Operation Showtime” by the authorities, on February 28, 1993, was entirely unnecessary. Koresh had invited BATF agents out to inspect the guns and discuss any problem they had with him, the local Sheriff had a good relationship with Koresh and had been out there several times, and Koresh himself could have easily been arrested and questioned at any point. There was no need for an armed assault (aka “dynamic entry”) that peaceful Sunday morning.

2. The Arms: The Branch Davidians were not “hording weapons” nor were they any threat to their neighbors or the public. Their stock of arms was no more a “hoard” than the inventory of any licensed gun dealer in Texas. Actually, per person, all told, they owned less guns than the average Texas citizen. The “illegal” guns in question, weapons converted from semi- to fully automatic are not “illegal,” but apparently the Davidians had failed to fill out the proper paperwork and pay the required fees for such weapons. Such registration violations surely do not merit armed assault. The Davidians traded their weapons regularly at gun shows and used such commerce to financially support their community. The Davidians did believe in self-defense and part of their motivation for having arms was just such a contingency as that of the BATF assault February 28th.

3. The Assault: Koresh went to the door and said “Don’t shoot, there are women and children in here,” and Harvard Law School graduate Wayne Martin called 911 and begged the authorities to stop the shooting as soon as it started. Video footage plainly shows BATF agents firing multiple rounds into the thin frame building at Mt. Carmel, shielded behind the vehicles parked in front. None of the windows of the vehicles are shattered by return fire, no guns appear in the curtained windows. Agents also fired from helicopters above down into the building full of women and children. A few Davidians did fire back, but most cowered on the floors. Judy Schneider took a bullet while holding her baby in a rocking chair in a bedroom. Winston Blake was shot dead sitting on the side of his bed eating a morning piece of toast. David’s father-in-law, Perry Jones, was shot in the stomach standing in front of the door. Most of the Davidians were just waking up on a Sunday morning and had no idea what had happened when suddenly gunfire ripped through the thin walled building. The BATF casualties were mainly to those agents who sought to forcefully enter the upper story on the roof firing inside and using hand grenades. Several Davidians, including Koresh fired back in self-defense.

4. The Community: The members of the community were a group of intelligent, educated, self-aware, rational, and biblically committed Christians who had come to believe that David Koresh was a Messiah figure who had been given a final revelation for the Last Days. They took the Lord’s Supper daily, prayed, sung songs, and engaged in Bible studies. The video they sent out in early March was never released to the public because it showed a calm and rational group of highly committed people who were telling the truth about what happened on February 28th and explaining their belief system. They did not fit the stereotype of the crazed cult follower.

5.The Standoff: David Koresh did not repeatedly lie to the FBI during the 51 Day siege. There is not a single documented lie he told the whole time of the standoff. He wanted to come out peacefully but had two concerns—that his message would somehow be communicated to the outside without distortion and that what happened on February 28th would be fairly handled in legal proceedings. He sent out all the children but his own, and all his adult followers whom he judged might not be strong enough or have enough conviction to stay through to the end.  He was worried that the Davidians would be arrested, charged with murder, thrown in jail, and evidence destroyed, plus the faith they held be cast as one more crazy cult message.  He reversed his March 2nd pledge to exit after the radio broadcast of his message because it was not really broadcast widely and he believed he received a “Word” from God to wait. His pledge to exit on April 14th was in good faith and he was convinced that at least there was a way to insure both the purity of his message and the proper legal treatment of him and his people.

6. The Exit Plan. Koresh had worked out with his lawyer Dick DeGuerin a full exit plan, even down to the order people would come out, and sent out a signed legal agreement a few days before the final assault with the tanks and CS gas. He did not trust the Federal authorities and insisted on Texas Rangers being involved. He had also worked out a plan via Drs. Arnold and Tabor for his exposition of the Seven Seals, the core of the Davidian message, to be properly presented to the world in a manuscript he would hand over to them upon exit. The final recorded conversations between Koresh and the negotiators even two days before the fire show an upbeat Koresh, openly rejoicing at the deal that had been worked out, and eagerly anticipating the exit of the group and the peaceful resolution of the crisis and standoff.

7. Janet Reno Deceived. Attorney General Janet Reno was never told of any exit plan or deal that had been worked out. She repeatedly asked the FBI officials if there was any hope, or any other way. She was told that all avenues had been exhausted, that children were being abused, and that Koresh had repeatedly lied about his intentions. She was pressured to conclude that no other option was open other than the tank assault.

8. The Davidian Apocalypse. The Davidians did believe that they would face persecution and death eventually, as the book of Revelation predicts for the saints, but they were firmly convinced it would be in Israel, not the United States, sometime after the year 1995. They had no expectations that Waco in 1993 was a time that they were to die. Koresh believed that all that happened with the BATF and FBI was in the will of God, but he began to see the tragic events as God’s way of bringing his message to the world. He had no reason to want to die and his convictions that he was a chosen Messiah and had a final message for the world was his main motive to resolve things peacefully. According to prophecy he was to live to gather 144,000 followers would eventually move to Israel and live on Mt. Zion in Jerusalem. He believed that the BATF assault and the FBI standoff had tragically led to his notoriety that would actually allow this prophecy to be fulfilled. Before the siege he had perhaps 200 followers worldwide—and now his name had suddenly become a household name.  He was sad for the tragic deaths but encouraged by the potential this had put before him.

9. The Seven Seals Manuscript. Koresh finished writing his exposition of the 1st seal on the Saturday before the Monday assault and resulting fire. The group was quite upbeat and ecstatic. Although he did not want to send it out bit by bit he reluctantly agreed to do so on Saturday and was having the 1st seal typed up on Sunday before the assault. Steve Schneider called the FBI once the tanks began to attack and told the FBI negotiators, powerless at that time, that the first chapter was ready to be sent out as agreed.  The manuscript survived the fire on a computer disk that Ruth Riddle, a survivor, carried out.  She had typed it the previous day.

10. The Fire. Although it is possible that David ordered a fire set at the very end, concluding that the FBI had broken its word and had no interest in his manuscript that is not entirely clear. The “bug tapes” are not as clear as alleged and the jarring of the tanks against the frame building, with hay bales and oil lanterns in each room, might well have been a cause of fire, as well as pyro-technic projectiles that were found in the areas where the fires began. If the Davidians did start the fire it was likely out of their belief that they would walk out unharmed, like Daniel’s friends in the Lion’s Den, thus triumphing over their foes. Their horrible deaths were an ending that never needed to be. 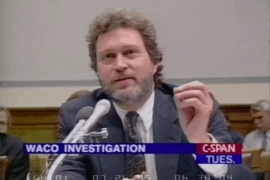 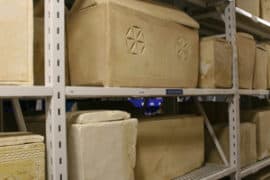