A precious fragmented copy of a portion of the lost Gospel of Peter was discovered in 1886 by the French archaeologist Urbain Bouriant, buried in the tomb of a monk at Akhmim in Upper Egypt. On the basis of the cursive script this copy dates to the 8th or 9th century CE. We don’t know how much of the Jesus story the text as a whole might have covered since this partial copy begins with a scene of Jesus’ trial before Herod and Pilate and takes one through the story of his crucifixion, burial, and a very dramatic resurrection account. It ends, rather strangely, with a second “empty tomb” story in which Mary Magdalene and her friends visit the grave and flee in fear, and the subsequent scattering of Jesus’ followers back to Galilee. There it abruptly breaks off. Whether the original text was a more complete narrative of Jesus’ career, or just an account of his last days we can’t be sure. According to Eusebius, the 4th century church historian, it was being used by the Syrian Christians around the year 200 CE, and Serapion, bishop of Antioch, raised doubts about its orthodoxy, while declaring that most of it reflected the “right teachings of the Savior” (Ecclesiastical History 6.12..2-6). 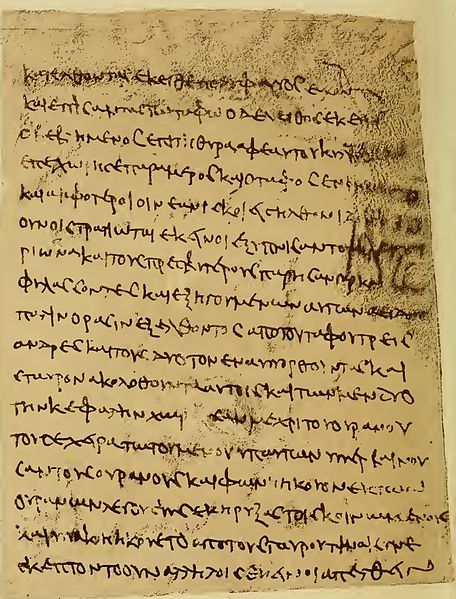 The text itself is complex and multilayered. Scholars over the past 100 years have debated whether it is an independent composition or a secondary one, cobbled together in a derivative fashion from our canonical gospels. It does in fact have elements in common with Mark, Matthew, Luke, and John, but also much material independent from, and in sharp contrast to, these works. That the writer is not simply taking the canonical gospels and embellishing them by building up and expanding their narratives seems clear. John Crossan and others have argued that embedded in this fragment is indeed our earliest passion narrative, dating to the mid-1st century.

I encourage readers of this Blog who are not familiar with this text to read it through, as it is readily available on-line and in various printed editions of the so-called “New Testament Apocrypha.” I highly recommend the Early Christian Writings Web site as it has not only various translations of the text, but also commentary and critical discussion. If one is interested in a printed copy I recommend the latest edition of The Complete Gospels, edited by Robert Miller. It has many other texts of interest including the “Signs Source” taken from the gospel of John, the Q Source, and various fragments of the Hebrew/Ebionite gospels, all in fresh new translations.

Of the many fascinating elements in this text I wanted to note one in particular that is relevant to what I have written in The Jesus Dynasty, as well as some of my recent discussions on this Blog related to the last days of Jesus, the “empty tomb” and Jesus’ resurrection.

The GPeter has a different chronological scheme from the standard and traditional Friday-crucifixion and Sunday-morning-resurrection scheme that most assume from Mark, Matthew, Luke, and John. In the GPeter we are told that after Jesus died and was buried his disciples were in hiding and the Peter as narrator declares: “We fasted and sat mourning and weeping night and day until the Sabbath” (7:3). This would indicate that at least a day and a night passed between the crucifixion and burial and the arrival of the Sabbath, impossible with a traditional Good Friday crucifixion. This chronology does make sense if one assumes, as the GPeter has it, that the “Sabbath” immediately following the crucifixion at sundown was not the weekly Saturday but the annual Passover Sabbath of the 1st day of Unleavened Bread (see The Jesus Dynasty, pp. 198-200 for a chart and discussion). This fits in well with the gospel of John that says that Jesus was crucified before the Passover Seder, and that the “Sabbath” falling at sunset was a “high day” (John 13:1; 18:28; 19:31). Thus Jesus would have been crucified on a Thursday, not a Friday, buried at sundown, with the Passover “Sabbath” falling on Friday and the weekly Sabbath on Saturday. What one has then is two “Sabbaths” back-to-back.

According to the GPeter the sealed tomb of Jesus is dramatically opened by two men who descend from heaven in a blinding light on Saturday night, not Sunday morning. The stone is rolled back and while the guards watch in astonishment the two go into the tomb and lead out a third, namely Jesus, with a walking-talking cross following them. The heads of the two “reach up to heaven,” while the head of Jesus “reaches beyond the heavens,” which I take is a way of describing his direct ascent to heaven (9:1-3).

Early Sunday morning “Mary of Magdala,” who is, quite significantly I think, called a disciple of the Lord, comes with some friends to complete the rites of Jewish burial and mourning, completely unaware that the tomb has been opened and is empty. They encounter a young man in the tomb, just as in the gospel of Mark (no angels, earthquakes, or other dramatic events), who tells them Jesus is risen and gone to heaven. They flee the tomb in fear and amazement (13:1-3). A week passes, the Passover feast is over with the last of the seven days of Unleavened Bread, and only then the disciples return home to Galilee, with Peter and Andrew resuming their fishing:

[58] Now it was the final day of the Unleavened Bread; and many went out returning to their home since the feast was over. [59] But we twelve disciples of the Lord were weeping and sorrowful; and each one, sorrowful because of what had come to pass, departed to his home. [60] But I, Simon Peter, and my brother Andrew, having taken our nets, went off to the sea. And there was with us Levi of Alphaeus whom the Lord …

There the text abruptly ends, though the original clearly went on with some kind of closing which is now lost to us. Whether it included any appearance of Jesus in Galilee, we can’t be sure but notice the striking words in the mouth of Peter: “But we twelve disciples of the Lord were weeping and sorrowful; and each one, sorrowful because of what had come to pass, departed to his home.” Clearly no one has seen Jesus resurrected nor experienced anything similar to the Easter joy we find in the gospels of Luke and John. Assuming the disciples did recover their faith and come to believe Jesus had been raised from the dead it was only weeks later–and in Galilee not Jerusalem that first Easter weekend.

What I find particularly significant about these sections of the text is that like Mark it has no appearances of Jesus, the women flee the tomb, and the disciples return home to their fishing in Galilee weeping and in despair. There are no appearances in Jerusalem—to Mary Magdalene, to Peter, or to the Twelve. Also, in this text there are really “two” empty tomb narratives, one on Saturday night, when the tomb is vacated, and the other Sunday morning when the women visit and discover it empty.

I am convinced that the GPeter does indeed preserve an independent and early version of the last days of Jesus but with dramatic miraculous embellishments inserted at a later time. But even with these fantastic elements (the flashing angels and “talking cross”), the bare narrative sequence is most interesting—both in terms of chronology and content. Notice these elements:

• Jesus is crucified on a Thursday, with double Sabbaths falling on Friday and Saturday
• The tomb is empty on Saturday night after the Sabbath is over
• The women find the empty tomb on Sunday morning and flee the scene
• The disciples return to their homes and resume their work as fishermen in Galilee

These elements correspond closely to my own reconstruction of events based on a critical reading of our canonical gospels of Mark, Matthew, Luke, and John as I present them in The Jesus Dynasty, and in subsequent blog posts–see “The Strange Ending of the Gospel of Mark” and “Why People are Confused about the Earliest Christian View of Resurrection of the Dead.”  But it is the fourth element here–the return to Galilee–that is particularly intriguing.

Most everyone has in his or her head the movie version of the post-resurrection scenes that one finds in Luke 24 and John 20 where Jesus appears to his disciples on several occasions in Jerusalem. Luke not only reports nothing of the Galilee tradition but he seems to explicitly counter it in the scene where Jesus tells his disciples to stay in the city until Shavuot/Pentecost (Luke 24:49). In contrast the Galilee tradition is all that Mark knows, and Matthew follows him wholly in that regard. John 21, which is an appended ending to that Gospel, offers a most interesting account of Jesus encountering the disciples in Galilee when they have gone back to their fishing business. It is that tradition that the GPeter also seems to know, placing the return home, as one would expect, following the seven days of Unleavened Bread at the end of the Passover holiday. If one accepts that the empty tomb visit by Mary Magdalene and the women early Sunday morning belongs to a more original or earlier strata of the GPeter, as I am convinced is the case, then we have another independent witness to this all but forgotten post-resurrection scenario with no appearances of Jesus to the disciples in Jerusalem following the discovery of the empty tomb and their return to their fishing business in Galilee. This essential outline of things is supported by Mark, Matthew, John 21, and the GPeter with the alternative Jerusalem scenario found only in Luke 24 and John 20.

Joseph Gone Missing?
The First and Second Burials of Jesus