Nine years, almost to the day, after Roman legionaries destroyed God’s house in Jerusalem, God destroyed the luxurious watering holes of the Roman elite. Was this God’s revenge? That’s not exactly the question I want to raise, however. Rather, did anyone at the time see it that way? Did anyone connect the eruption of Mt. Vesuvius in 79 C.E. with the Roman destruction of Jerusalem in 70?

Editor Hershel Shanks raises a most provocative question in this 2010 feature cover article in Biblical Archaeology Review. Did Jews living in the Roman empire associate the sudden volcanic incineration of the Naples port city of Pompeii in 79 CE with God’s payback punishment upon Rome for destroying Jerusalem? As Shanks shows, there is good evidence that such is the case. He points to some amazing archaeological remains, such as a charcoal graffiti that seems to reference “Sodom and Gomorrah,” as well as a Christian apocalyptic text, book 4 of the Sibylline Oracles, that parallels the two events and refers to the latter as “the wrath of the heavenly God.” 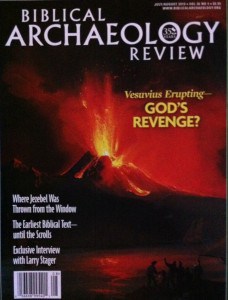 I have become convinced there is much more. In 2010 I spent several months studying the archaeological records related to ancient Pompeii, including significant time at the site working with Simcha Jacobovici and his research team who were filming his international television special, “Vesuvius and the Fear of God,” available through Associated Producers in the series “Secrets of Christianity.” The film documents some of the major discoveries we made including some “behind-the-scenes” interviews with several Italian experts and curators who presented evidence that had never appeared on camera before. I came away convinced, based on the material/archaeological evidence, that Jews as well as Jewish and non-Jewish Christians understood Pompeii’s destruction as divine retribution. The thesis of the film is a bold one–not only that Jews and Christians saw the destruction of Pompeii as a sign of God’s apocalyptic wrath but that the utter destruction of the city served as a huge boon to the spread of Christianity in the Roman world:

Long ignored archaeological evidence – found beneath the ashes of Pompeii and Herculaneum – seems to suggest that what put the fear of God into pagan Romans was not Jesus, Peter or Paul. It now seems that the event most responsible for Christianity’s conquest of the Roman Empire was…the eruption of Mt. Vesuvius.

However, in the course of my own textual research I made another discovery–one that was new for me at least. I became convinced that chapter 18 of the New Testament book of Revelation is an eyewitness account, very much parallel to that of Pliny the Younger, of the August 79 CE destruction of Pompeii–but understood by the writer as signaling the fall of Babylon the Great–namely, the demise of the Roman Empire itself! Most scholars agree that the prophecies of the book of Revelation can be dated variously  from the end of the reign of Nero through the Flavians (68-80s CE). The author of chapter 18 of Revelation provides us with a poetic oracle against the “great city” pictured as a “whore” riding the seven-headed beast of the Roman Empire–drunk with the blood of the martyrs and the saints. Her destruction comes with fire–in one hour–while those in ships watch her burning from afar, lamenting the loss of her wealth and the splendor of her trade and commerce. The Naples/Pompeii port was the gateway to ancient Rome. As such its destruction signaled that of the expected apocalyptic FALL of Rome itself–both as a city and an empire. 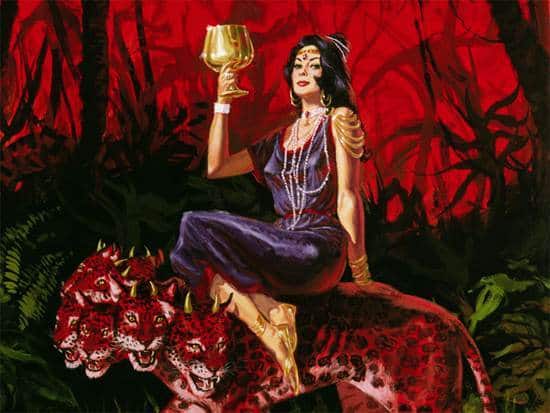 Here is a translation (Revised Standard Version) of the oracle itself without commentary. I think my readers will agree that one could hardly imagine a more accurate description of the destruction of Pompeii/Rome down to its every detail:

After this I saw another angel coming down from heaven, having great authority; and the earth was made bright with his splendor. 2 And he called out with a mighty voice,

“Fallen, fallen is Babylon the great!
It has become a dwelling place of demons,
a haunt of every foul spirit,
a haunt of every foul and hateful bird;
3 For all nations have drunkthe wine of her impure passion,
and the kings of the earth have committed fornication with her,
and the merchants of the earth have grown rich with the wealth of her wantonness.”

4 Then I heard another voice from heaven saying,

“Come out of her, my people,
lest you take part in her sins,
lest you share in her plagues;
5 for her sins are heaped high as heaven,
and God has remembered her iniquities.
6 Render to her as she herself has rendered,
and repay her double for her deeds;
mix a double draught for her in the cup she mixed.
7 As she glorified herself and played the wanton,
so give her a like measure of torment and mourning.
Since in her heart she says, ‘A queen I sit,
I am no widow, mourning I shall never see,’
8 so shall her plagues come in a single day,
pestilence and mourning and famine,
and she shall be burned with fire;
for mighty is the Lord God who judges her.”

9 And the kings of the earth, who committed fornication and were wanton with her, will weep and wail over her when they see the smoke of her burning; 10 they will stand far off, in fear of her torment, and say,

“Alas! alas! thou great city,
thou mighty city, Babylon!
In one hour has thy judgment come.”

11 And the merchants of the earth weep and mourn for her, since no one buys their cargo any more, 12 cargo of gold, silver, jewels and pearls, fine linen, purple, silk and scarlet, all kinds of scented wood, all articles of ivory, all articles of costly wood, bronze, iron and marble,13 cinnamon, spice, incense, myrrh, frankincense, wine, oil, fine flour and wheat, cattle and sheep, horses and chariots, and slaves, that is, human souls.

14 “The fruit for which thy soul longed has gone from thee,
and all thy dainties and thy splendor are lost to thee, never to be found again!”

15 The merchants of these wares, who gained wealth from her, will stand far off, in fear of her torment, weeping and mourning aloud,

16 “Alas, alas, for the great city
that was clothed in fine linen, in purple and scarlet,
bedecked with gold, with jewels, and with pearls!
17 In one hour all this wealth has been laid waste.”

And all shipmasters and seafaring men, sailors and all whose trade is on the sea, stood far off18 and cried out as they saw the smoke of her burning,

19 And they threw dust on their heads, as they wept and mourned, crying out,

“Alas, alas, for the great city
where all who had ships at sea grew rich by her wealth!
In one hour she has been laid waste.
20 Rejoice over her, O heaven,
O saints and apostles and prophets,
for God has given judgment for you against her!”

21 Then a mighty angel took up a stone like a great millstone and threw it into the sea, saying, 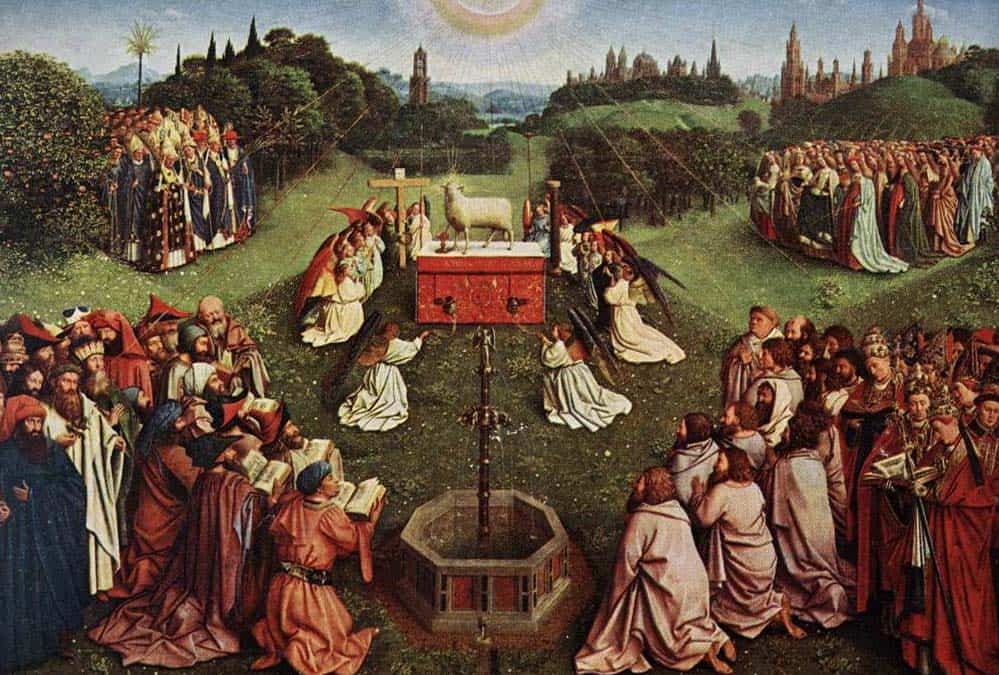 Eat My Body, Drink My Blood–Did Jesus Ever Really Say This?
Did John the Baptist Eat Bugs, Beans, or Pancakes?