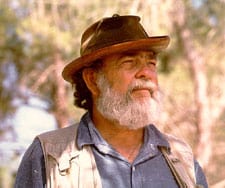 James F. Strange died on March 23rd. I got the sad news via a text message while traveling in the deserts of Jordan. I loved him dearly, considered him my “archaeological” mentor, excavated with him for three seasons at Sepphoris in the 1990s. We differed sharply in our views of the historical Jesus but treated one another with respect, see “Was Christianity All a Mistake?” (3 part review of my book, The Jesus Dynasty with my responses).There was no one better, as a Bible scholar, historian, archaeologist, and a devoted Christian. He inspired the beginnings of our archaeological program at UNC Charlotte, now formidably expanded with faculty member Shimon Gibson and our ongoing excavations at Mt Zion. I can still hear his deep laugh echoing through the Galilean hills of the Beit Netofa Valley.

He was Tampa’s own Indiana Jones.

James Francis Strange never carried a bullwhip, saved damsels in distress or kept the Nazis from acquiring religious relics that could conquer the world.

But like the movie character, he was a biblical archaeologist who wore a dusty brown fedora, worked as a professor when not digging for artifacts, and even discovered an ancient sacred Jewish ark.

Dr. Strange — a religious studies professor at the University of South Florida since 1972 and a former dean of its College of Arts and Letters — died March 23 from complications of cancer. The native Texan was 80 and still teaching at USF.

“He felt God called him to be an archaeologist and a professor of religious studies at a state university, not a private one,” said his wife of 57 years, Lillian Strange. “He used to say he wanted to be the best archaeologist he can be.”

From the 1960s through 2015, Dr. Strange took regular trips to the Middle East for archaeological research, digging in Judea, Samaria and the coast of Israel. Among his discoveries were pottery, coins and mosaics, some of which were displayed at the Smithsonian Institution and the Rockefeller Museum.

Then there was the time he dug up a half-ton holy ark, a limestone vessel for sacred scriptures.

No, it was not the ark, the one holding the Ten Commandments that melted Nazis in Harrison Ford’s 1981 film Indiana Jones and Raiders of the Lost Ark. Nonetheless, it dated back thousands of years.

“It was found around the time the movie came out,” Lillian Strange said, sounding amused. “People kept calling him to ask what happened when he opened it. ‘Nothing,’ he had to tell them.”

His work most famously took him to the ruins of Sepphoris, about 4 miles from Nazareth, the childhood home of Jesus. Dr. Strange said his findings of large parts of buildings, aqueducts and an outdoor theater proved Sepphoris to be a sophisticated city.

Though Sepphoris is not mentioned in the New Testament, Dr. Strange believed Jesus would have spent considerable time there.

Dr. Strange would say that link means Jesus was not a simple rural carpenter — as many learned — but a worldly urbanite who alongside his carpenter father may have even been employed on a construction crew building Sepphoris.

“We’ve created this rather romantic picture of Jesus — a sturdy, country lad who makes good,” Dr. Strange once told the Tampa Bay Times. “But archaeology is not good at nurturing romance. What it does best is produce facts.”

Peter Baker, a USF class of 2010 graduate with a bachelor’s degree in religious studies, said Dr. Strange’s lessons on such critical thinking were the greatest gift he passed on to students.

“The world might be a bit more melancholy,” he said, “but his teachings and his munificence lives on through all of us.”

Michael DeJonge, chairman of USF’s Religious Studies Department, said since Dr. Strange’s death a line of current and past students have visited to describe “how he changed their lives. I am only now, after his death, realizing how much his students loved him. Yes, love is the right word.”

Love is indeed what defined Dr. Strange, his wife said.

“Some time ago, he told me anger would not be a part of his life,” she said. “He taught people not to judge, but to love.”

Service: A memorial will be held at 2 p.m. April 28 at Bayshore Baptist Church. 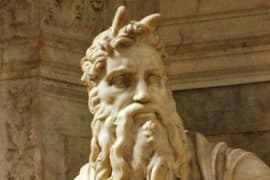 What About a Moses with “Horns”–Was it More than a Mistranslation?
Crucifixion Nails: Our Latest Evidence 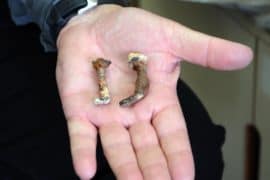