Quoting what were considered “sacred texts,” in this case what becomes known as the Hebrew Bible (or Christian Old Testament), was a most complex process, ranging from allusions, metaphors, typology to a more literal “proof texting” in which one tries to show a kind of “this is that” correspondence between what a “scripture” text “said” and what it might mean in a new context. This is particular true of Prophetic texts, for example in the gospel of Luke 24:44 where Jesus is quoted as “upbraiding” the apostles for being “slow to believe” such predictive passages. In the Dead Sea Scrolls we have what is called the Pesherim–which means running commentaries on the line-by-line “It is interpreted….” meaning of say Habakkuk or one of the Hebrew Prophets. In Rabbinic texts (Tosephta, Mishnah, Talmuds) we find a less precise use of Hebrew Bible quotations–most often plays on words, allusions, or typological–in contrast to literal, applications.

So what about our most learned and intellectual writer in the New Testament–Saul of Tarus, better known today as the Apostle Paul? He was surely familiar with the range of ways in which “Scripture” texts were quoted and applied in his day. What methods does he make use of? [1]In this short interview with #Mythvision Podcast host Derek Lambert we explore this question. I urge you to check out his channel for a fascinating collection of video interviews and discussions … Continue reading

What’s What in 2022 and Beyond with the Two Talpiot Tombs in Jerusalem? 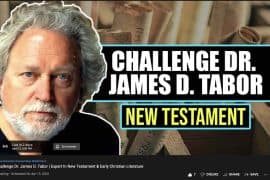