The Book of Genesis: A New Translation from the Transparent English Version (Charlotte, NC: Genesis2000, 2020). Available now in Amazon Print and Kindle editions, both USA and International.

There’s an ancient, mysterious quality about it that makes me want to like Moses take my shoes off while standing on holy ground. Professor James D. Langford, Ph.D. Linguistics, University of Texas 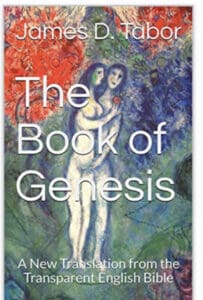 Praise for the Book of Genesis:

It also brings the reader closer to the spirit and sense of the original sources than any other translation I have seen.

As close as we will probably ever come to the original text.

There’s an ancient, mysterious quality about it that makes me want to like Moses take my shoes off while standing on holy ground.

Paul’s Ascent to Paradise: The Apostolic Message and Mission of Paul in the Light of his Mystical Experiences (Charlotte, NC: Genesis2000, 2020). Available now via Amazon in Print and Kindle editions, both USA and International. More e-book platforms coming soon.

Paul makes the singular claim to have been the “last but not the least” of the Apostles of Jesus. Paul never met Jesus, but he makes high claims for his experiences of mystical revelations that include his ascent to heaven and his claim to not only have “seen” Jesus in his glory, but to have regularly communicated with the one he calls the Risen Christ. Early Christianity, as it unfolds, stands or falls on the claims of this single man whose Message and Mission are distinct from that of James, Peter, and John. In this book Paul’s Ascent to Paradise becomes an entrée into his whole world of Hellenistic mystical religious experience. This “history of religions” approach to Paul supersedes the dogmatic approaches of Christian theology and dogma. It is refreshing, gripping, dramatic, bold and fascinating. For Paul the “appointed time of the end had grown very short,” to use his words. Everything has to be viewed through that apocalyptic lens and one is transported back to Paul’s social world, the “battles of the apostles,” and either his triumph or his failure–depending on the judgment of history.

Tabor’s study [of Paul] is not the defanged apostle so familiar to us from Christian theology and much of contemporary New Testament scholarship, but a religious experimenter steeped in magic and mysticism, full of apocalyptic fervor, and inhabiting a cosmos populated with demons andangels.
Arthur Droge, Journal of Religion

Tabor has put his finger on the pulse of what is most central and characteristic about the Jesus movement from its earliest and most direct witness.
Jonathan Z. Smith, University of Chicago 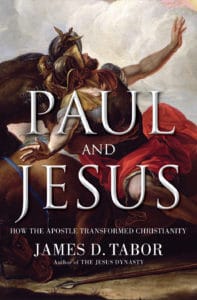 In this “compulsively readable exploration of the tangled world of Christian origins” (Publishers Weekly), religious historian James Tabor illuminates the earliest years of Jesus’ teachings before Paul shaped them into the religion we know today.

This fascinating examination of the earliest years of Christianity reveals how the man we call St. Paul shaped Christianity as we know it today.

Historians know almost nothing about the two decades following the crucifixion of Jesus, when his followers regrouped and began to spread his message. During this time Paul joined the movement and began to preach to the gentiles. Using the oldest Christian documents that we have—the letters of Paul—as well as other early Chris­tian sources, historian and scholar James Tabor reconstructs the origins of Christianity. Tabor shows how Paul separated himself from Peter and James to introduce his own version of Christianity, which would continue to develop independently of the message that Jesus, James, and Peter preached.

Paul and Jesus illuminates the fascinating period of history when Christianity was born out of Judaism. 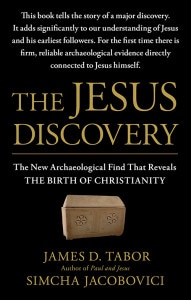 The Jesus Discovery: The New Archaeological Find That Reveals the Birth of Christianity, with Simcha Jacobovici. (New York: Simon & Schuster, 2012)

In 1981, a tomb was discovered under a condominium in Jerusalem that held ossuaries inscribed with such names as Jesus, son of Joseph; Mary; and Mariamene Mara. Although the bone boxes were ignored for more than 20 years, when they were finally examined, the case was made that they held the bones of Jesus, mother Mary, Mary Magdalene, Jesus’ brother, and a son of Jesus (!). This theory was largely rejected due to the commonality of the names. Now, another tomb under the same condo building has been examined using specialized robotic cameras. Untouched for more than 2,000 years, two of these newly discovered bone boxes contain further references to Jesus, according to the authors. One, they claim, is inscribed with a large fish, symbolic of Jonah, whose story is mentioned by Jesus in Matthew and Luke. The other has words scratched upon it that say, “The Divine Jehovah raises up from the dead.” Tabor, a religious studies professor, and filmmaker Jacobovici do an excellent job of walking readers through the discoveries, framing the history; explaining the what, why, and how of ancient ossuaries; and taking another look at the statistical evidence surrounding the names in the first tomb. For readers, however, the book’s problem is the photographs. Printed on dull stock, they are difficult to make out. The fish looks like a decorative urn, and it’s almost impossible to see the stick figure of Jonah often mentioned in the text. Considering the conditions under which the photos were obtained, the poor quality may be understandable, but why not at least have labels to show what is being discussed? Will this discovery cause heated debate? It already has. And a Discovery Channel television program coming soon will turn up the temperature still higher. Ilene Cooper

“An exciting, extraordinary, exceptional discovery. See for yourself the first archeological evidence ever for early Christian belief in resurrection.” (Barrie Wilson, Professor of Religious Studies, York University, Toronto and author of How Jesus Became Christian)

Covered by CNN, “Nightline” and cover story on Eretz magazine.

The book was the subject of a one month special forum (March 2012) on the American Schools of Oriental Research web site and was featured in a special session at the March 2013 ASOR Southeast Regional meeting, see “An Overview of The Jesus Discovery” for links to the papers. 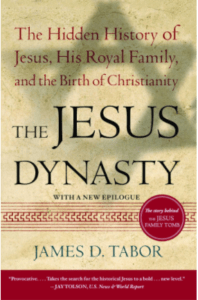 The Jesus Dynasty: A New Historical Investigation of Jesus, His Royal Family, and the Birth of Christianity (New York: Simon & Schuster, April 2006. Published in twenty languages.

The Jesus Dynasty offers a startling new interpretation of the life of Jesus and the origins of Christianity that is grounded in careful analysis of the earliest Christian documents and recent archaeological discoveries, including the much-discussed “Jesus family tomb.”

In The Jesus Dynasty, biblical scholar James Tabor brings us closer than ever to the historical Jesus. He explains the crucial relationship between Jesus, a royal descendant of David, and his relative John the Baptizer, a priestly descendant of Aaron and Jesus’ teacher. When John was killed, several of his followers — including Jesus’ four brothers — joined with Jesus, who continued John’s mission, preaching the same apocalyptic message. After Jesus confronted the Roman authorities in Jerusalem and was crucified, his brother James succeeded him as the leader of the Jesus dynasty.

James Tabor has studied the earliest surviving documents of Christianity for more than thirty years and has participated in important archaeological excavations in Israel. His reconstruction of the life of Jesus and his followers, and of the early years of Christianity, will change our understanding of one of the most crucial moments in history.

Tabor, chair of religious studies at UNC-Charlotte, offers a bold and sometimes speculative interpretation of the historical Jesus and his family, beginning with his paternity. Evaluating several possibilities, Tabor concludes that the most historically plausible claim is that Jesus’ father was neither God nor Joseph, but another man, possibly a Roman soldier named Pantera. He also argues that Joseph likely died when Jesus was young, leaving Jesus head of a household that included his six half-siblings. Like many scholars, Tabor emphasizes that we must understand Jesus in the context of first-century Judaism. After Jesus’ death, his brother James took over the titular family dynasty. James championed a version of the faith quite different from Paul’s, and, although James was more faithful to Jesus’ original teachings, Paul’s Christianity won. Tabor not only challenges Christian dogma, he also makes some assumptions with which not all scholars will agree: he places a great deal of emphasis on the hypothetical text Q, calling it “our most authentic early Christian document.” This book is accessible and sure to be highly controversial, attracting the attention of reporters, spiritual seekers, historians and fans of The Da Vinci Code.

Startling claims in nonfiction works about Jesus and early Christianity are hardly new (hello, Holy Blood, Holy Grail), but Tabor, an academic and archaeologist, makes a solid case for the dynastic aspects of the Jesus movement and the importance of James the Just, Jesus’ brother, during the period when the early church was forming. That said, the structure of the book seems scattered. Tabor begins with several exciting archaeological finds with which he was involved, including the discovery of a cave that might have been used by John the Baptist and the very recent discovery of a tomb with ossuaries that could be linked to Jesus’ family members. This fascinating narrative hooks readers but doesn’t quite meld with the rest of the book. Another problem is his emphasis on the genealogies of Jesus presented in Matthew and Luke, which are discounted by many scholars. Yet Tabor dares to go where few authors do: he takes on the subjects of Jesus’ earthly paternity (including the case for a Roman father), his relationship to John the Baptist as partner rather than forerunner, and Jesus’ expectations for his movement (as opposed to the direction in which it was taken by Paul). This breaks new ground on the journey to find the historical Jesus, and it is certain to prompt much discussion–and not a little controversy. Ilene Cooper

“Many scholars have undertaken studies of Jesus and his legacy; none has dared advance the boldly provocative theses of The Jesus Dynasty.” — Bart Ehrman, author of Misquoting Jesus

“James Tabor stands out among his generation of biblical scholars for his thorough familiarity with the full range of textual evidence from the first centuries, his extensive experience with archaeological excavations, and his imagination and creativity. Tabor has a remarkable ability to discern the contours of vital religious movements from the scattered bits and pieces of evidence that survive from antiquity. Anyone who takes the career of Jesus seriously will have to reckon with his bold, new synthesis.”
— Professor Eugene V. Gallagher, Rosemary Park Professor of Religious Studies, Connecticut College 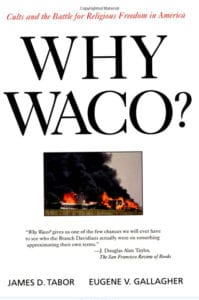 Why Waco: Cults and the Battle for Religious Freedom in America, co-authored with Eugene Gallagher (Berkeley: University of California Press, 1995), paperback edition published in April, 1997.

Malcom Gladwell, in his featured piece in the New Yorker, “Sacred and Profane: How Not to Negotiate with Believers,” (March 31, 2014) credited Tabor and his colleague Philip Arnold, as singularly pursuing a course of action in the 1993 Waco/David Koresh tragedy that well might have resulted in a peaceful outcome. 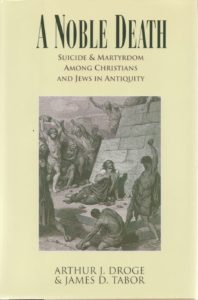 Focusing primarily on the period from the death of Socrates to Augustine of Hippo, the authors investigate the Greek legacy: the six cases of voluntary death in the Hebrew Bible and later references to these; Josephus, Philo, and early Rabbinic ideas; early Christian ideas of martyrdom and the teachings of Greek Fathers of the Church and Tertullian. They emphasize the voluntariness of martyrdom and the great shift in Christian opinion of voluntary death occasioned by Augustine’s absolute condemnation of it, except in the express instance of divine command. Droge and Tabor view their study as important background to today’s death-with-dignity issues. This relevance makes the book important for the informed layperson as well as scholars, ethicists, and clergy. Highly recommended for academic and large public libraries. 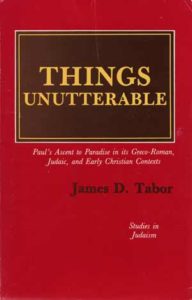