Here is the Part 2 of my reposting of my responses to the review of my 2006 book, The Jesus Dynasty, by my friend and colleague Prof. James F. Strange originally published in Biblical Archaeology Review (November/December, 2006, pp. 72-76). You can read Part 1, “Was Christianity All a Mistake?” here. 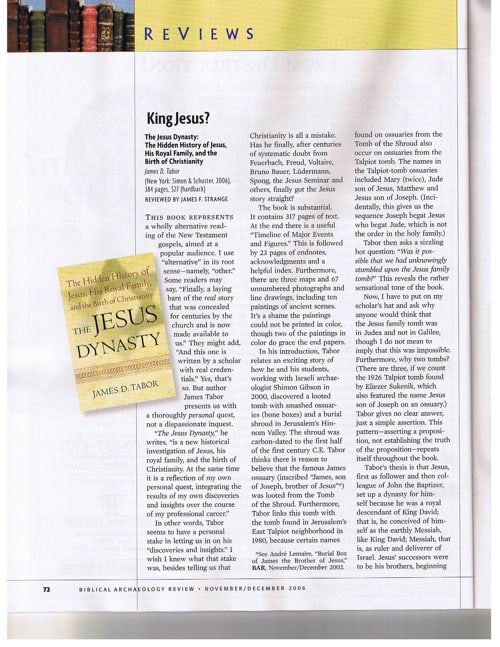 In the Introduction to my book titled “A Tale of Two Tombs” I explore the question of the possible provenance of the controversial ossuary that surfaced to public attention in October, 2002 with the inscription “James son of Joseph, brother of Jesus.” I remain convinced that the evidence for the authenticity of the inscription is strong, see my post “What’s What Regarding the Controversial James Ossuary.”  I would urge readers to avail themselves of the latest reports, particularly Biblical Archaeology Review editor Hershel Shank’s book, James Brother of Jesus: The Forgery Trial of the Century, available for download as a free e-book here. No matter how many times one hears the inscription has been shown to be a forgery this is simply not the case.  Anyway, Dr. Strange writes the following in his review:

In his introduction, Tabor relates an exciting story of how he and his students, working with Israeli archaeologist Shimon Gibson in 2000, discovered a looted tomb with smashed ossuaries (bones boxes) and a burial shroud in Jerusalem’s Hinnon Valley. . . Tabor thinks there is reason to believe that the famous James ossuary… was looted from the Tomb. Furthermore, Tabor links this tomb with the tomb found in Jerusalem’s East Talpiot neighborhood in 1980, because certain names found on ossuaries form the Tomb of the Shroud also occur on ossuaries from the Talpiot tomb…Tabor then asks a sizzling hot question: “Was it possible that we had unknowingly stumbled upon the Jesus family tomb?” This reveals the rather sensational tone of the book.

Now, I have to put on my scholar’s hat and ask why anyone would think that the Jesus family tomb was in Judea and not in Galilee, though I do not mean to imply that this was impossible. Furthermore, why two tombs? (There are three, if we count the 1926 Talpiot tomb found by Eliezar Sukenik, which also featured the name Jesus son of Joseph on an ossuary.) Tabor gives no clear answer, just a simple assertion. This pattern–asserting a proposition, not establishing the truth of the proposition–repeats itself throughout the book (p. 72).

I regret that Prof. Strange has misunderstood the point of my discussion in that chapter on the Two Tombs, so let me clarify things a bit here. The chapter is based on my own view that the James ossuary inscription is authentic and likely held the bones of James brother of Jesus. Since much of my book is about the “Jesus Dynasty,” that is how James and subsequent family members took over the leadership of the Messianic Movement, for his ossuary to have surfaced after nearly 2000 years is truly a remarkable thing, and adds the kind of “material evidence” to the textual evidence for James as the brother of Jesus of which we normally can only dream. Accordingly, the main focus of this introductory chapter was to raise a further question–where did this ossuary come from? It was obviously looted from a tomb somewhere in Jerusalem, but can we know when, and if so, which tomb might it likely have come from?

The Tomb of the Shroud, which Shimon Gibson, Boaz Zissu, and I explored in 2000, and the Talpiot tomb, that was excavated by archaeologists in 1980 are not connected in any way as far as I know, nor are the names found in either tomb linked to one another. For further background on this important discovery see my post “The Only Authentic 1st Century Burial Shroud Ever Discovered in Jerusalem.”

Dr. Strange has misunderstood what I wrote. The reason I bring in these two tombs has to do with the unresolved issue of the date that the owner of the ossuary, Oded Golan, acquired it–in other words, when did it first surface on the antiquities market? Golan has given a number of dates, but he has consistently maintained he had it in his possession for 15-20 years. On the other hand, the IAA trial indictment against Mr. Golan claimed that he acquired it rather recently, not too long before it came to public view in 2002. What I try to present in my Introduction is the circumstantial evidence for either the Tomb of the Shroud (2000) or the Talpiot tomb (1980) being the tomb from which the James ossuary was looted. There is no connection I see between the two, but evidence in both cases, depending on when Golan acquired the ossuary, that points to one or the other.

Strange mentions a “third tomb,” but as far as I know the ossuary published by Sukenik inscribed “Jesus son of Joseph,” Sukenik found stored in the basement warehouse of what is now the Rockefeller Museum and it has no known provenance. Since it was discovered sometime before 1926 it is most unlikely that it came from the same tomb as the James ossuary acquired by Golan, and thus no reason, other than a similarity of common names, to connect it to Jesus or anyone in his family.

Now, as to the matter of possibly “stumbling upon the Jesus family tomb,” it would all depend on whether or not the Tomb of the Shroud was the tomb from which the James ossuary was looted. The government’s evidence for Golan acquiring the ossuary rather recently has not yet been revealed, but Gibson and I became aware of other evidence that pointed rather strongly to our Shroud Tomb as the home of the James ossuary. This involves personal conversations between Oded Golan and our colleague Rafi Lewis, regarding the James ossuary having been looted from a tomb “near Silwan.” [1]See Shimon Gibson’s speculations regarding the James ossuary being stolen from the Akeldama “tomb of the Shroud.” Shimon Gibson, “A Lost Cause: A Response from Shimon Gibson … Continue reading On the other hand, if Golan did have the James ossuary, intact with its full inscription, going back to the 1980s, and he presented a photograph at the trial to prove that then there is some interesting circumstantial evidence that points to the East Talpiot tomb as its home. You can read his full testimony here. What I do in my introduction is survey the evidence for both and in the end I am not able to reach any firm conclusion, since we have not been permitted to carry out DNA tests on the remains in the James ossuary compared to individuals in either of the two tombs. Maybe there is a “third tomb,” but as far as I know there is no evidence linking the James ossuary to any but the two I mention, so those are the ones I consider and discuss.

As for the Jesus family tomb being in Galilee or Jerusalem, unlike Dr. Strange, I would favor Jerusalem. We seem to have pretty firm traditions that James was buried in Jerusalem in 62 CE., and his corpse was not carried to any family tomb Galilee. This would seem to indicate that the family has relocated itself by this time in the Holy City, which is the HQ for the growing movement worldwide. I don’t find it at all unlikely that Mary, her other sons, and her daughters, as well as extended relatives, might be put in the same tomb or tombs. For detailed arguments on the best evidence see my post, “In-Depth Reading on the Talpiot “Jesus Family” Tomb.”

Why assume that James was buried in isolation when family burial is the normal practice? There are, of course, several locations for “tombs of Mary” in Jerusalem today, and I think one also in Ephesus as well. Given the burial of James, and now the James ossuary, plus the family exercising its leadership over the movement from Jerusalem, not Galilee, I am convinced that Jerusalem is more likely the place for the family burials.

My intention in my introduction was not to be sensational, but to bring to the public attention the potential implications of an authentic ossuary holding the bones of James the brother of Jesus, and the location of the tomb from which it was looted, as a vivid reminder of the family of Jesus, together in death as in life–and what that can mean for recovering the message of James. Admittedly, if either of the two possibilities I suggest are valid, and I am not aware of any others that have been proposed with any supporting evidence, one can not help but feel a bit of excitement in the discovery. I hope that further research and tests will determine some of these matters to the satisfaction of all of us who care about history and archaeology.